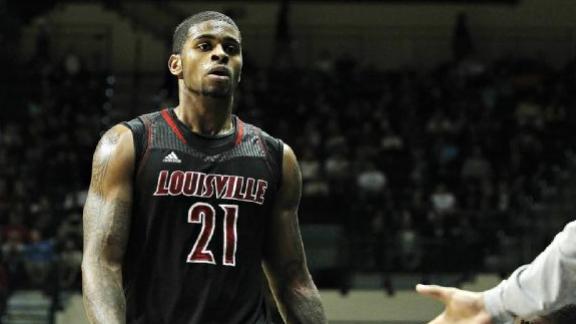 Chane Behanan, who was dismissed from Louisville in December, will enter the NBA draft, he confirmed via text message to ESPN.com's Jeff Goodman.

Behanan's decision was earlier reported by The Coloradoan.

"I love the game, and I want to compete with the best," he told ESPN. "I also want to show the NBA and the people that Chane Behanan wasn't raised like everybody talks about. My family was devastated about my decision-making in the past, and believe me I've heard it from them still [to] this day. But I am human. It's behind us, and it's nothing but moving forward from here on out."

Behanan, a key member of the Cardinals' 2013 national championship team, signed with Colorado State in January and had been taking online classes. Earlier this month, however, he was cited for marijuana possession in Louisville. He wasn't arrested but is scheduled for a court date on April 29.

He had been in Houston at John Lucas' Wellness and Aftercare program recently and has conceded that he was dismissed from Louisville because of marijuana use.

The 6-foot-6 Behanan initially was suspended by coach Rick Pitino in October for a violation of team rules. He was reinstated in November but dismissed from the team Dec. 30.

As a sophomore, he was instrumental in the Cardinals' run to the national title. He averaged 9.8 points and 6.5 rebounds for the season and had 15 points and 12 boards against Michigan in the championship game.