Changes made to NFL replay system 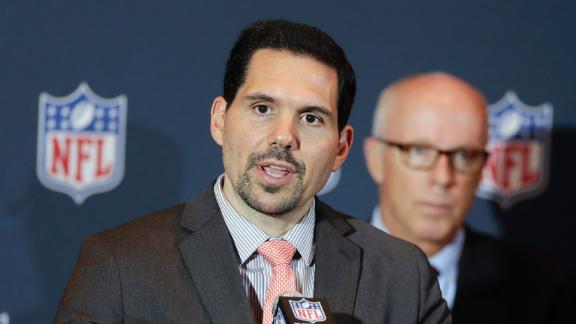 Officially known as Rules Proposal 9, the centralized replay system will feature feeds from every game as well as an ability to communicate with officials through headsets as referees view replays on sideline monitors.

Referees will have the ability to consult with the league's Officiating Command Center in New York as they view replays at game sites. Referees still will make the final calls on plays.

Asked Monday how the system would work if approved, NFL vice president of officiating Dean Blandino said, "It's still a referee review; he has the ultimate authority. We'll come to a consensus. We're certainly not going to let him make a mistake, but the referee has the final authority on the call.''

Blandino also said the system would allow plays in question to be evaluated by those at the league office even before referees make it to sideline monitors. Once at the monitors, referees could then communicate with Blandino and his staff.

"It will be a discussion; we'll consult,'' Blandino said. "We'll give him the information because we'll have already started looking at it before he even gets under the hood, and we can give him our input, put him in the right position to make the right call and we'll have discussion and come to a conclusion.''

Also Tuesday, owners approved a ban on "roll-up'' blocks to the side of an opposing player's leg. The rule had previously banned only those blocks from behind.

The owners will consider the remaining bylaws or rule change proposals Wednesday.