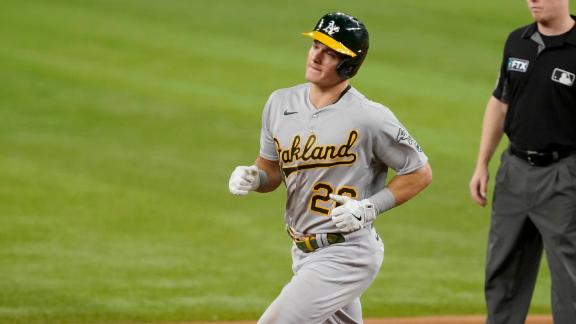 ARLINGTON, Texas -- - The only thing that could top another defensive gem for Oakland Athletics third baseman Matt Chapman was his milestone homer.

Along with his spectacular diving catch running into the outfield, a play that manager Bob Melvin doubts anyone else would have made, Chapman hit two of Oakland's five solo homers. His second long ball was the 100th of his career in an 8-3 win over the Texas Rangers on Saturday night.


"I'm definitely going to cherish this one," said Chapman, who has been scuffling at the plate this season, hitting .218 with a league-high 149 strikeouts.

Matt Olson hit his 30th homer before Mitch Moreland and Seth Brown also went deep for the AL wild card-leading A's, who have won 12 of their last 15 games.

Moreland led off the seventh with an opposite-field shot to left-center to snap a 3-all tie, and Chapman immediately followed with his second homer of the game, a 407-foot drive to left.

His seventh career multi-homer game and defensive gem came on the same night five-time Gold Glove-winning third baseman Adrian Beltre was inducted into the Rangers Hall of Fame during a pregame ceremony.

A two-time Gold Glove winner himself, Chapman was running with his back to the plate when he lunged and reached out to catch Brock Holt's popup in shallow left field near the line. Chapman quickly popped up, twisted around and made a strong throw across the diamond trying to double off a runner at first.

"I've seen him do some miraculous things ... I don't know if it's the best one ever, but I don't know anybody else makes that play," Melvin said.

Chapman won consecutive Gold Gloves in 2018 and 2019, but missed the end of last season and the playoffs because of hip surgery. He feels as though he is playing the same caliber defense again, and maybe he is starting to get back on track with his bat.


"If he starts going offensively, here over the last 40 games or whatever it is, we could be a different team," Melvin said. "Games like this could potentially be a springboard."

Chapman homered in the second for a 2-1 lead. Olson's homer in the sixth put Oakland up 3-1, and he added an RBI single as the A's scored four times in the seventh. Brown homered in the ninth.

Andrew Chafin won his first decision in eight appearances for the A's since being acquired in a trade last month from the Chicago Cubs. The lefty worked 1 2/3 scoreless innings in relief of starter James Kaprielian.

The second homer by Chapman chased Rangers starter Jordan Lyles (5-10), who has allowed 31 homers this season - just behind the majors-high 33 given up by his teammate, 11-game loser Mike Foltynewicz. Lyles struck out five without a walk, but is 0-5 with a 7.46 ERA in six starts since the All-Star break after the right-hander had won his previous three.

"The home runs came, and one or two of them on decent pitches, but I think the Chapman sliders were too much plate that didn't slide," Lyles said. "Every time the ball's up in the air it feels like it's going out this year, unfortunately. It's disappointing."

The Rangers had three consecutive singles to start the sixth and tied the game at 3 when Jonah Heim hit a sacrifice fly to deep center. Nathaniel Lowe drove in the other two runs, with an RBI double in the first inning and when he had the third single in a row in the sixth.

Starling Marte had two hits to extend his hitting streak to 12 games. He has played only 14 games with the A's since coming over in a trade from Miami. ... Oakland SS Elvis Andrus was placed on paternity leave so he could be with his wife for the birth of their third child. The Rangers' starting shortstop the previous 12 seasons missed the ceremony for Beltre. .... Texas rookie DH Yohel Pozo finished 2 for 4, a night after also going 2 for 4 in his big league debut.

Athletics: 2B Josh Harrison missed his second game in a row because of a strained right quadriceps. Jed Lowrie started at second base and had three singles with an RBI.

A matchup of lefties in the series finale. Oakland's Sean Manaea (8-7, 3.43 ERA) is 2-5 with a 4.18 ERA over last last nine starts since June 20, with the A's providing a total of four runs of support in those five losses. Kolby Allard (2-10, 4.93), who turned 24 on Friday, is coming off a no-decision Tuesday at Seattle that ended his Rangers-record streak of losing eight consecutive starts.