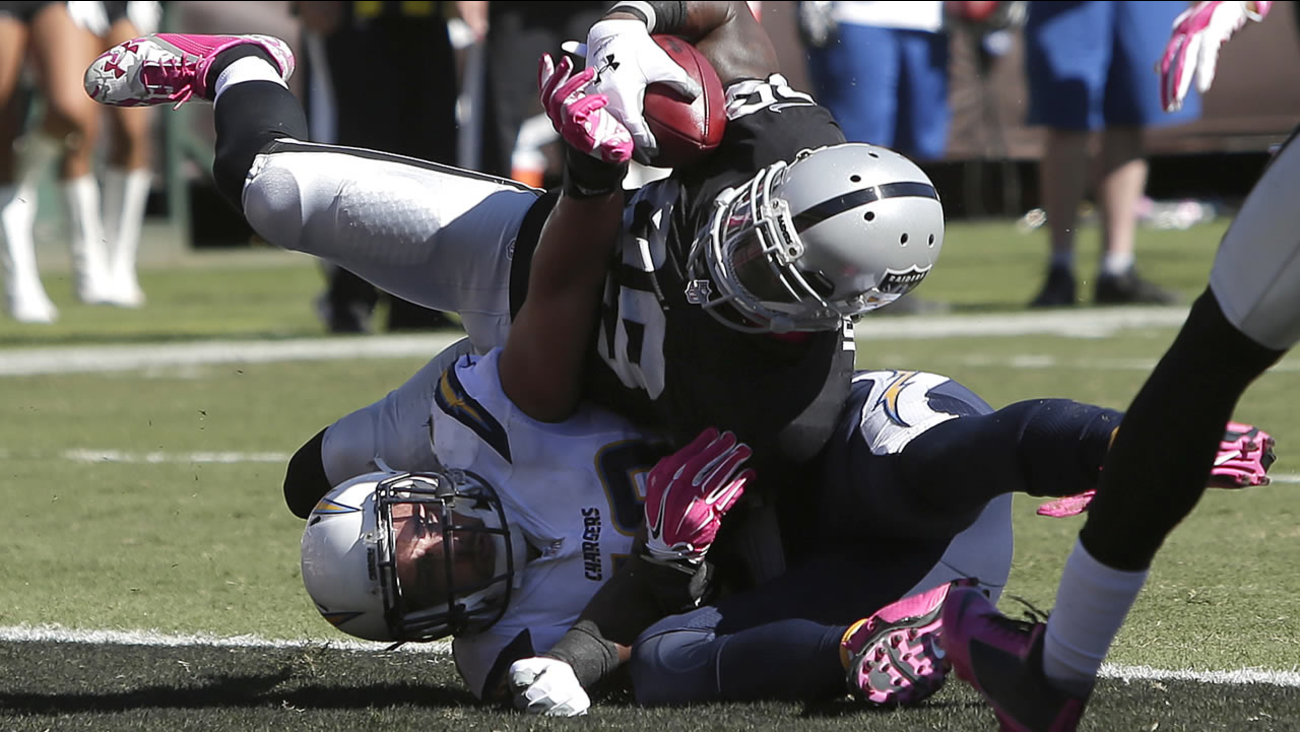 Oliver scored on a 1-yard run with 1:56 to play and the San Diego Chargers dealt Oakland interim coach Tony Sparano a loss in his debut with the Raiders, 31-28 on Sunday.

Rookie Derek Carr threw four touchdown passes for the Raiders and gave them a 28-21 lead on a 6-yard throw to Andre Holmes with 10:01 to play.

But Rivers answered with a pair of scoring drives and Carr then was intercepted by rookie Jason Verrett with 1:13 to play to seal the victory.

Oliver, an undrafted rookie out of Buffalo, ran for 101 yards to complement another strong performance by Rivers, who threw for 313 yards and posted a 120 passer rating for a record fifth straight game.

Carr threw for 283 yards in his best game of his rookie season and could have had a lot more if not for several drops by his receivers.

His best throw might have been his last TD as he rolled to his right and patiently waited for Holmes to break open in the back of the end zone to put Oakland up 28-21.

Rivers had his chances after that, but Tarell Brown knocked away a third down pass in the end zone to Antonio Gates, leading to a 30-yard field goal by Nick Novak.

After the Raiders went three-and-out for the second time all game, Rivers got the ball at the Oakland 39 with 4:43 to play and calmly led the Chargers downfield to set up Oliver's winning run.

Sparano talked this week after replacing the fired Dennis Allen of ending a pattern of "Oakland beating Oakland" and the Raiders were the beneficiaries of San Diego mistakes to take the lead in the third quarter.

The Chargers committed a hold and an illegal hands to the face to stall a drive, but appeared to score anyway when Novak drilled a 54-yard field goal. But that was also wiped out because of a hold on Ladarius Green, leaving San Diego in a fourth-and-35 at the 46.

Instead of punting, the Chargers called for a fake with up back Eric Weddle taking the snap and trying to hit Seyi Ajirotutu on a deep pass down the sideline that was incomplete.

Oakland took advantage of the good field position to take the lead on Carr's 47-yard TD pass to Brice Butler that put the Raiders up 21-14 for their first second-half lead since last Thanksgiving in Dallas.

Rivers answered with his 1-yarder to Gates for his third TD pass to tie the game late in the third and set the stage for the dramatic fourth quarter.

Carr threw a 77-yard touchdown pass to Holmes in the opening minute and he and Rivers each had two scoring throws to send the game to halftime tied at 14.