Chris Davis: Jose Bautista a 'good dude ... said no one ever' 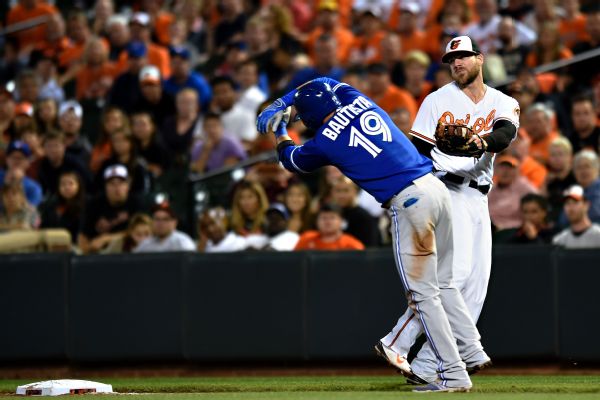 The Baltimore Orioles and Toronto Blue Jays outfielder Jose Bautista have a history of hostility. The feud apparently will continue in 2017, at least from Baltimore's perspective.

Asked Saturday by a young fan at the team's FanFest about his opinion of Bautista, Chris Davis didn't hold back.

"He's actually a pretty good dude," Davis said but then added after a pause, "said no one ever."

He then added that Bautista is "a guy who's easy to dislike."

Bautista has had a number of incidents with Orioles pitcher Darren O'Day and outfielder Adam Jones.

In 2013, O'Day and Bautista exchanged words after the slugger struck out. Bautista later homered in that game and the two got into it again. In 2014, O'Day plunked Bautista in what appeared to be retaliation for Jays pitcher Marcus Stroman throwing at an Orioles hitter.

Then in an April 2015 game, Jones took exception to a Bautista bat flip after a home run, and the two exchanged words.

Orioles general manager Dan Duquette said in December that his team wasn't pursuing Bautista, who was a free agent at the time, because Baltimore's fans didn't like the slugger. Duquette later clarified his comments.