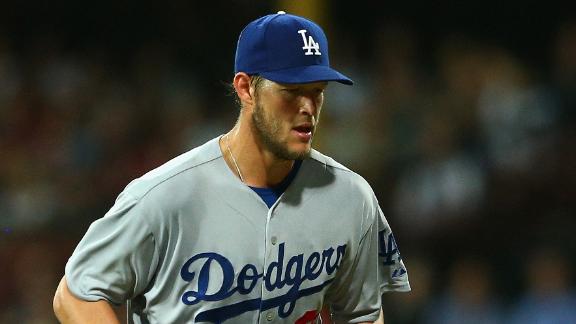 ANAHEIM, Calif. -- Los Angeles Dodgers ace Clayton Kershaw is headed to the 15-day disabled list for the first time in his seven-year career because of a swollen muscle in his left upper back.

The move, which will be made Sunday, comes after Kershaw told manager Don Mattingly on Friday that he no longer felt pain in the area.

"I'm not going to get into specifics,'' Kershaw told reporters Saturday. "I can't pitch right now. It's frustrating. I've been hurt before where I knew when I'd be able to pitch. I'm getting better right now, just not fast enough. You don't feel like you're a part of the team when you're hurt. It's not a good feeling.''

Kershaw was gradually increasing the distance and velocity of his throws on Saturday when he felt a twinge on toss No. 27, Mattingly said.

"I think that once Clayton felt something, he knew that he wasn't going to make his start on Friday,'' Mattingly said. "With his throwing progression, the fact that he stopped right away is all we've asked of him from the beginning: 'If you feel it at all, you've got to stop.' And he stopped right away.''

The 26-year-old left-hander, coming off his second Cy Young Award in three years, already had been scratched from his scheduled start in San Diego on Sunday after an MRI revealed the problem. Kershaw was hoping to get back in the rotation for Friday's home opener against San Francisco.

"He felt it, and that was the last straw,'' Mattingly said. "So at that point, we knew we couldn't have gone any farther and that it was a DL situation. It's a situation -- not just for me, but for everyone -- that we've got to save Clayton from Clayton at this point and be cautious.

Mattingly said it was the coaching staff's decision to shut down Kershaw.

"We're not going to allow him to keep trying to push and go forward," he said. "If it was up to him, I'm sure he'd want to keep pushing to go further. ... We can't allow him to do that right now, period, at any time."

The move will be retroactive to March 23, and he will be eligible to return from the DL on April 7.

"This is not something that we say, 'OK, we think he'll be ready by this date' -- and if he doesn't get there, then it's like, 'Oh, Clayton's had a setback,' '' Mattingly said. "We should just let it do what it's supposed to do and let the medical staff do their work, let them tell us what he could do. And because of all the days off we have and the schedule we have, it's really not worth pushing him.''

It will not affect the rotation for games Sunday, Tuesday and Wednesday against the Padres. The Dodgers get another day off Thursday before resuming play against the Giants. Hyun-Jin Ryu, the scheduled starter for Sunday night's game in San Diego, will take Kershaw's spot Friday, Mattingly said.

Ryu started and won the second game of the Australia trip, but tore a toenail while running the bases that day and wasn't sure he'd be able to fill in for Kershaw until after his side session Friday.

Kershaw led the majors in ERA for the third straight year, becoming the first pitcher to accomplish that feat since newly elected Hall of Famer Greg Maddux did it from 1993 to '95.

Kershaw, who signed a $215 million, seven-year contract on Jan. 15, won the Dodgers' season opener 3-1 against the Arizona Diamondbacks in Australia last weekend, allowing one run and five hits in 6 2/3 innings.

Kershaw told ESPN.com's Ramona Shelburne following the initial injury that he wasn't sure how it occurred, but dismissed the notion that it might be a result of the shortened spring training caused by the trip to Australia.

"I progressed well, my pitch count increased each time, so I don't think the shortened spring had anything to do with it," he said earlier this week.

Information from ESPN.com's Dan Arritt and the Associated Press was used in this report.