Clippers' Chris Paul (hamstring) ruled out for Game 1 against Rockets 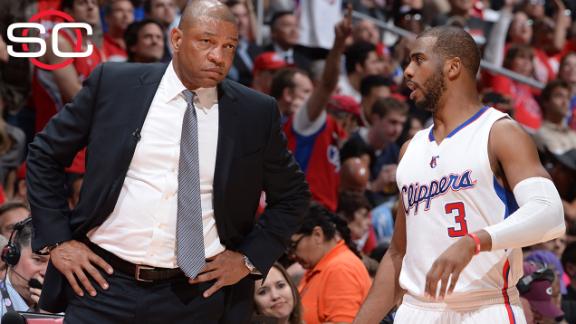 "I just don't think he was healthy enough to play," coach Doc Rivers said. "I guess in a Game 7, he probably could have played, I'm not even sure with that. I just don't think the risk is worth it. I pretty much knew all day. I just had to wait for [Clippers head athletic trainer Jasen Powell] to tell me for sure but I honestly had made my mind up. They were going to have to change my mind more than tell me that he was healthy."

Paul, who has been getting around the clock treatment since suffering a left hamstring strain in Saturday's series-clinching win over the San Antonio Spurs, went through a light shootaround with the team on Monday and the decision to sit him for the game was made soon after that.

"I've had the injury," Rivers said. "I just don't like playing with it. It's not worth it because if you re-injure that you're done and to me it wasn't worth the risk."

Rivers wasn't sure how long Paul would be out with the injury but admitted Paul could potentially miss Game 2 on Wednesday as well before the series moves to Los Angeles on Friday. Rivers did say he expected Paul to be back at some point during the series.

"We'll see, it could be two games, it could be one, we don't know that," Rivers said. "I haven't thought that far ahead to be honest but right away I had pretty much made my mind up that he wasn't going to play tonight. ... He's moved around and he's feeling a lot better but it's not going to happen [Monday]... I'm confident he's going to return. I don't know about Game 2 yet."

Paul spoke to Rivers after the decision was made but Rivers said he wasn't going to change his mind.

"I wasn't going to listen," Rivers said. "He did [say something] but it didn't matter. With a knee or something you can say we'll see what you got but this is one of those where I don't want to see what you have because if you're wrong, then you're wrong for the series and it's just not worth the risk."

Paul grabbed his left hamstring right before hitting a 3-pointer to give the Clippers a 23-22 lead with 2:11 remaining in the first quarter and exited 20 seconds later. He looked to be in tears as his head was buried in his hands while Powell talked to him and sent him back to the locker room.

Paul returned in the second quarter but was limping noticeably throughout the game and occasionally grabbed his left hamstring. He finished with 27 points -- including the game-winning shot with 1 second left -- and six assists. It was a performance that perhaps became even more impressive given Paul's absence to start the second round of the playoffs.

"I was playing him on adrenaline," Rivers said. "When he [hurt the hamstring] the second time, I looked to [assistant coach Mike Woodson] and said, 'Well, he's not playing Game 1.' That was during the game. That was the way I felt at that time. I was more than happy if someone could have changed my mind on that but it unfortunately came true and it does tell you what he was going through the other night."

Austin Rivers will likely start in Paul's place but his absence will mean more minutes for Jamal Crawford and perhaps even Lester Hudson, who originally signed a 10-day contract with the team at the end of the season.

"When you don't have your point guards on the floor you don't run more offense, you run less offense," Rivers said. "You run more movement so I have to get Austin and Lester and Jamal not to try to view themselves as Chris Paul and just go play. So what you lose besides Chris Paul, you lose your playbook in a lot of ways. I have to be careful in what I call."

Paul, who turns 30 on Wednesday, averaged 19.1 points, 10.2 assists and 1.9 steals per game this season. This was the first time in his 10-year NBA career he started all 82 games during the regular season.