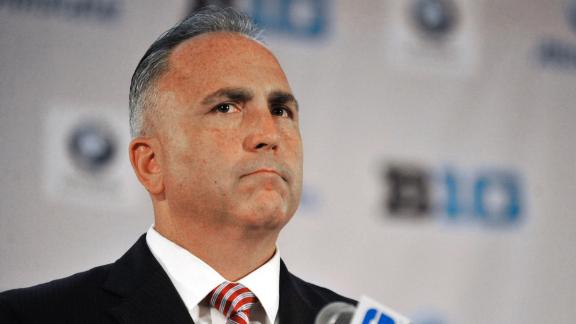 Rutgers coach Kyle Flood called it a "sad day" for Ray Rice and for Rutgers after video showing the formerBaltimore Ravens running back knocking out his then-fiance with a punch to the face was posted on the web.

Video of Rice dragging Janay Palmer from a hotel elevator at an Atlantic City casino on Feb. 15 has aired repeatedly. But Monday was the first time that video purporting to show Rice hitting Palmer directly had been shown.

"The video I saw this morning was difficult to watch as a husband and a father. There is nothing that can justify what I saw on that video," Flood said.

A Rutgers video tribute to "Knights in the NFL" that includes Rice -- the school's all-time leading rusher -- is shown on the scoreboard before home games. Flood was asked if Rutgers would remove Rice from it.

Rice had originally been suspended two games by Goodell, a penalty that was so severely criticized as too lenient that Goodell recently revamped the league's policies regarding domestic violence.

Rice rushed for 4,926 yards for the Scarlet Knights from 2005 to 2007. He is eligible to rejoin the Ravens after their game Thursday against the Steelers.