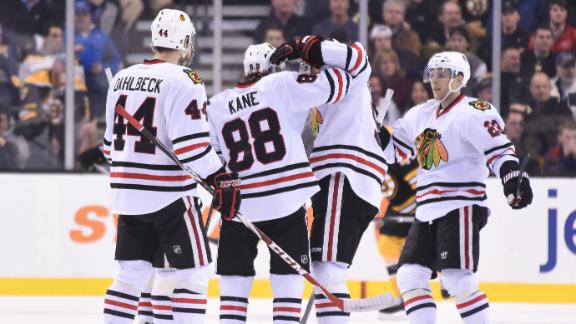 BOSTON -- The Chicago Blackhawks apparently dodged a bullet Thursday night as top-line center and captain Jonathan Toews is expected to be OK after leaving the team's 3-2 win over the Boston Bruins in the second period.

Toews suffered what Blackhawks coach Joel Quenneville labeled an upper-body injury on a hard hit into the boards from Bruins defenseman Dennis Seidenberg. It was announced at the start of the third period that he would not return.

"He seemed all right. We'll see how he is tomorrow," Quenneville said. "Looks like he's going to be all right."

Skating in the attacking zone during a chance on the power play midway through the second period, Toews was checked head-first into the end boards by Seidenberg and was slow to get up. Blackhawks trainer Mike Gapski was quick onto the ice to check on Toews, who was able to get up under his own power.

With Seidenberg going to the penalty box for a two-minute boarding penalty that gave the Blackhawks a 5-on-3 opportunity, Toews stayed on the ice once play resumed.

Less than a minute later, Toews was sent to the box for a two-minute hooking minor. Once he returned from the penalty, he skated straight to the bench and headed down the tunnel to the dressing room. Quenneville seemed to suggest that the decision was precautionary, as the team had just gone up 3-0 on a Patrick Kane goal with 6 minutes, 41 seconds remaining in the second.

Due to the nature of the hit, there is a distinct possibility that the league may look into it. Quenneville described the hit as "dangerous," but said he needed to watch it again before commenting further.

"Well I pride myself on being a clean player and a hard player to play against, so when I went in on that one-on-one battle there, I thought I saw his right shoulder and at the last second he might have turned, I don't know," Seidenberg said. "I didn't really see the replay or anything, and obviously I never want to see a guy go into the boards like that."

Blackhawks players had mixed feelings on the hit.

"Seidenberg has a reputation as a clean hockey player, he's got a lot of respect in the league," Patrick Sharp said. "But, having said that, we don't like that hit."

Added goalie Scott Darling said: "[It] didn't look very good on the replay. It's unfortunate when stuff like that happens. I'm sure it wasn't intentional, but I'm just happy he's OK."

For his part, Bruins coach Claude Julien took a strong stance against the penalty called on his defenseman.

"A player's job is to finish his check," Julien said. "So a player should know he's going to be hit.

"I wasn't happy. I looked at it, and it could be arguable, but from my end of it I think it's what it is. Our guys need to finish their checks and sure, you've got to be careful, but I'm sure he knew that he was coming."

Having played in all 28 of Chicago's games this season, Toews is the team's second-highest scorer with 23 points on 11 goals and 12 assists. He missed time due to a concussion in 2012.

"We're hoping that he's going to bounce back," Sharp said. "He's tough, he's been hit like that before. We certainly want him in the lineup as much as he can be."