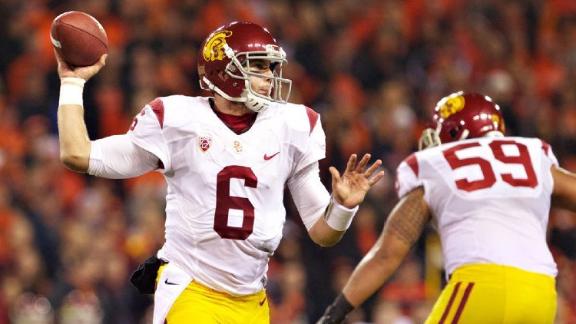 Prior to spring practice No. 13 on Tuesday, Sarkisian met with Kessler and backups Max Browne and Jalen Greene to inform them that Kessler would be the starter.

"I think he's extremely decisive from where he was in Week 1 in a new system to where he performed today," Sarkisian said. "He knows where he's going with the football. Are there some fundamentals and techniques we're going to continue to work on? Sure. But I think he's got a great deal of confidence. I love his leadership in the locker room with the players. He can throw the deep ball extremely well and he has enough athleticism to buy himself some time to create some plays down the field."

Kessler was locked in a quarterback competition in 2013 that spilled into the regular season before he finally claimed the job over Max Wittek. Kessler completed 236 of 361 passes for 2,968 yards with 20 touchdowns and seven interceptions. He posted a raw QBR of 59.7 with an adjusted QBR of 66.7 in guiding the Trojans to a 10-4 record and a victory in the Las Vegas Bowl, where he was named the game's MVP.

"I went in knowing that I have a year of experience and I know what it takes in big games to win and be successful," Kessler said. "I used that confidence and applied it to practice and treated every practice like a game."

Sarkisian reiterated that Kessler's starter status is contingent on continued improvement -- and that he expects Browne, Kessler's biggest challenger, to make another run at the job in the fall.

"This competition is going to wage on," Sarkisian said. "Max isn't just going to go away ... When fall camp rolls around, he's going to come and swing at him again and give Cody his best shot and Cody will either respond like he did this spring and continue to get better, or Max will pass him."

The Trojans practice again Thursday and then conclude the spring session with their spring game Saturday at the L.A. Coliseum.