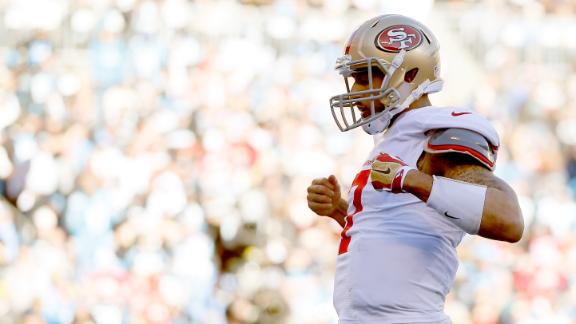 Colin Kaepernick and the San Francisco 49ers struck a deal Wednesday on a six-year contract extension, which sources told ESPN NFL Insider Adam Schefter is worth more than $110 million -- including a record $61 million guaranteed.

The deal ties Kaepernick to the 49ers through the 2020 season and puts him among the 10 highest-paid quarterbacks in the NFL. His signing bonus will be $12 million, sources told Schefter, unique in that most big contracts for quarterbacks are in the range of $24 million to $40 million. Kaepernick was scheduled to make $1.073 million this season.

"Colin's hard work and dedication have played an integral role in the recent success of the 49ers organization," general manager Trent Baalke said in a statement. "His work ethic, leadership and on-field production have positively influenced our team, and we look forward to his continued growth in all areas."

Since taking over the starting job from Alex Smith midway through the 2011 season, Kaepernick led the 49ers to their first Super Bowl in 18 years after the 2012 season -- losing by three points to Baltimore -- and then to the NFC title game again last season, a three-point defeat to the Seattle Seahawks, the eventual Super Bowl champion.

The extension is expected to have strong implications for potential deals for Cam Newton, Andy Dalton and Alex Smith this year, along with those for Andrew Luck, Robert Griffin III and Russell Wilson next year, when they are eligible to sign their first contract extensions.

A second-round draft pick out of Nevada in 2011, Kaepernick has thrived under former NFL quarterback Jim Harbaugh -- and the coach has said how much he wants the mobile, strong-armed QB around for the long haul. Accomplishing an extension before the season is a big deal as the team begins its first year in $1.2 billion Levi's Stadium at team headquarters.

"I really expect a real breakout year for Colin. Athletically, he looks bionic," Harbaugh said during the organized team activity last week. "If you all remember 'The Six Million Dollar Man,' that's what it looks like to me. He's very gifted and he always has been. He has the look and feel of a guy who's really going to break out, even more so than he already has. I'm really excited about everything about his game right now."

In a sensational playoff debut in January 2013 against Green Bay, Kaepernick used his speed to run for a quarterback-playoff-record 181 yards and two touchdowns. Then, in a season-opening win against the Packers last September, he threw for a career-best 412 yards and three scores.

Harbaugh remained optimistic of getting a new deal done, while Kaepernick said his only focus was on football and he was leaving it to his agents to do the rest. The quarterback had said he sought a "fair" deal.

He is regularly the first to arrive at work each morning and the last one off the field.

Kaepernick has completed 382 of 639 career passes for 5,046 yards and 31 passing touchdowns. He also has started all six postseason games in which he has appeared, earning four wins and passing for 1,374 yards and seven touchdowns.

He said last week he hopes a Miami investigation from April that names him will soon be over.

Last month, Miami police released two calls to a 911 dispatcher saying a woman identifying herself as Jesus was lying naked in a bed and refusing to leave. The callers said the woman wanted to spend time with a third man who wasn't there.

Police say the other players involved in the case are 49ers wide receiver Quinton Patton and Seahawks receiver Ricardo Lockette. None of them has been charged with any wrongdoing.

Kaepernick's Big Payday
ESPN NFL Insider Adam Schefter breaks down the QBs likely to receive new deals this offseason in light of Colin Kaepernick's $110 million deal, and which QB he thinks will be the highest paid from the 2012 NFL draft class after next season.