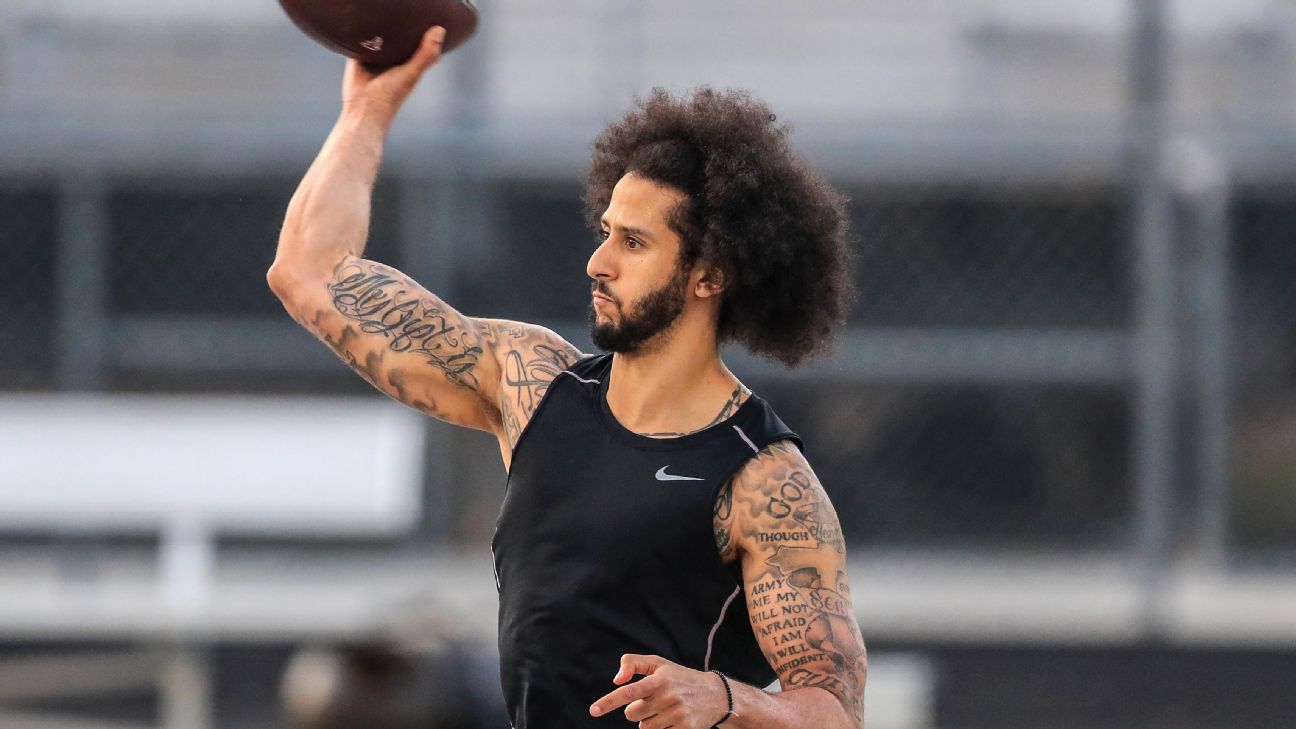 ESPN
By Vaughn McClure
RIVERDALE, Ga. -- Free-agent quarterback Colin Kaepernick, who completed a 40-minute workout in front of representatives from eight NFL teams on Saturday, said he's ready for another opportunity and wants the league to "stop running'' from him.

"We're out here. We're ready to play. We're ready to go anywhere. My agent, Jeff Nalley, is ready to talk [to] any team. I'll interview with any team at any time. I've been ready.''

Kaepernick saluted about 250 fans and signed autographs before addressing the media after his workout, which was moved about 60 miles from the Atlanta Falcons' facility in Flowery Branch to Charles R. Drew High School in Riverdale.

The change in venue interrupted schedules for many of the 25 teams that were scheduled to watch Kaepernick at the original site, but Kaepernick still threw in front of representatives from eight teams, according to Nalley, among them the Philadelphia Eagles, Kansas City Chiefs, New York Jets, Washington Redskins, San Francisco 49ers, Detroit Lionsand Tennessee Titans.

Kaepernick, who once quarterbacked the 49ers to the Super Bowl, protested police brutality and social injustice by kneeling during the national anthem and has been out of football since 2016.

The 32-year-old showed that he still has an arm by completing deep balls to former NFL receivers Brice Butler, Bruce Ellington, Jordan Veasy and Ari Wertz. Carolina Panthers safety Eric Reid, who supported Kaepernick going back to their days with the 49ers, was there at the beginning of the workout but had to leave to prepare for a game against the Falcons on Sunday.

Veasy said he found out about the workout Friday morning and worked out with Kaepernick at Georgia Tech before Saturday's session. He was asked what sort of message Kaepernick sent with the workout.

"A good one, one that's definitely going to help himself,'' Veasy said. "I don't think that's the question with Kap -- skill and ability.''

Asked about the hurdles Kaepernick faces if ability isn't the issue, Nalley responded, "Look, that's up to them. Roger Goodell represents the 32 owners, right? And he asked for this workout. Maybe this is Roger's first step into talking an owner into signing him. Hopefully, that's the case."

Kaepernick looked stronger up top than he was when he was with the 49ers and appeared to impress with his accuracy, completing all but seven of his 60 scripted throws, though not all his throws were perfect. It was a solid throwing session overall, particularly given the circumstances.

The NFL originally scheduled the workout to take place at the Falcons' facility, but Kaepernick's camp switched venues following a disagreement between the two sides on the quarterback'sliability waiver and media availability, among other factors.

In a statement, the NFL said it was "disappointed that Colin did not appear for his workout.''

The league said the waiver it sent Kaepernick's representatives was based on those "used by National Invitational Camp at all NFL Combines and by NFL clubs when trying out free agent players." An NFL source told ESPN that the waiver said the tryout isn't a guarantee of employment, "to prevent a player from claiming entitlement to worker's compensation if there was an injury."

A statement fromNalley and Kaepernick's attorney, Ben Meiselas, called that waiver "unusual" and said they proposed a "standard" liability waiver. The NFL called that proposed waiver "completely rewritten and insufficient."

The NFL also said it declined requests made by Kaepernick's camp in the 24 hours preceding the workout to have an additional camera crew record the workout and to open the session to media.

Nalley said it made no sense for the NFL to prevent Kaepernick's crew from filming their own workout. Nalley also said he spoke to a half-dozen general managers who were equally confused about the workout and the setup.

"The NFL was given a chance to have it at the Falcons' facility if they allowed y'all to watch the process and film it and have an independent camera crew, and they said, 'No,'" Nalley said. "To me, it should be an open process. What's secretive about this?"

Nalley said the league called Tuesday morning and said the venue had to be in Atlanta. Nalley also said he asked for accommodations -- day and location -- that made more sense to allow general managers and head coaches to attend, and the NFL denied the request. The major issue wasn't the location but holding the workout on a day such as Tuesday, when a decision-maker could be in attendance. There were no head coaches or general managers among the representatives at Saturday's workout. The most noticeable person of influence was Andrew Berry, the Eagles' vice president of football operations.

Nalley said the league floated the idea that Kaepernick's workout was more about being signed for next season, so Nalley wondered why the workout couldn't take place at the NFL owners meetings Dec. 12 in Las Colinas, Texas. Nalley said he also suggested having the workout at the NFL combine in February, but Kaepernick said he didn't want to take away from the players preparing for the draft.

Kaepernick's agent said he still had questions about the league's involvement in the workout.

"I think, myself, I think all of you all had questions about it all week,'' Nalley said. "Something didn't smell right. Again, nothing like this has ever happened. Roger Goodell said that the league does not get involved in player workouts, team decisions. So why did they do this? So I think from the beginning it seemed odd. And so that's why we had to protect him in this whole process.''

When asked whether he expected Kaepernick to receive an opportunity to sign with a team anytime soon, Nalley seemed skeptical.

"And, I've got to tell you what, I've got to hand it to Colin. He stepped up, showed he's in shape. I talked to the NFL people out here today. They said his arm talent is elite, that it's the same as when he came out of college. I even asked them: 'If you want to get him on a scale, see what he weighs.' They said, 'We don't need to. He looks ripped. He looks in great shape.'" 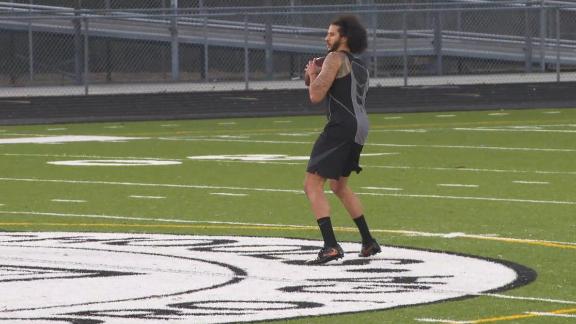 Kaepernick tosses the deep ball with ease
Colin Kaepernick shows off the arm strength with several completed deep balls in his relocated workout. 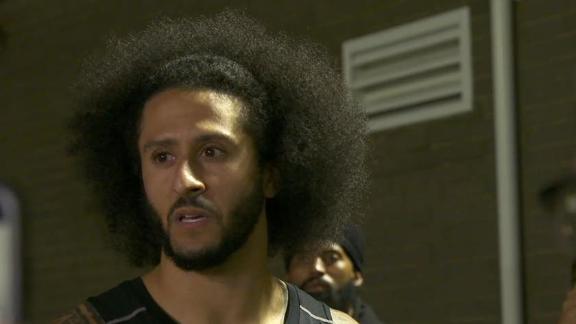