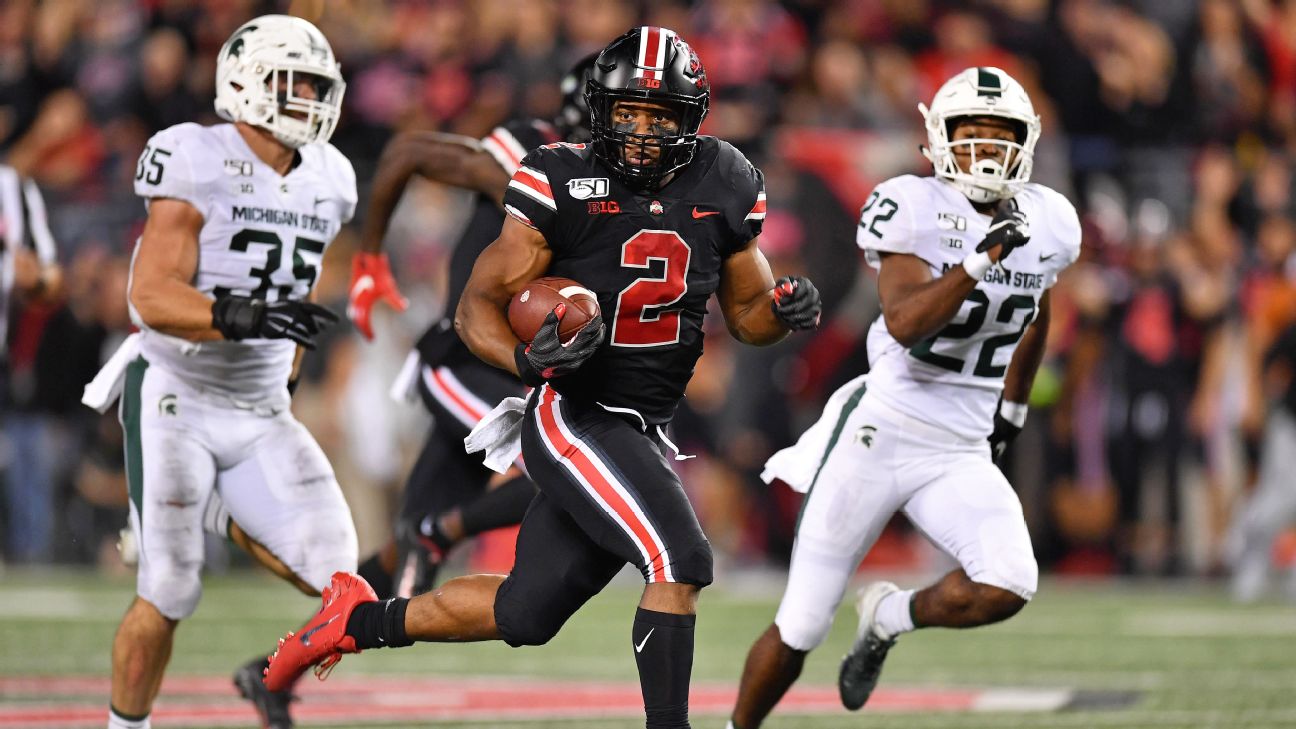 Florida held on at home against Auburn, and now the SEC is down to four unbeaten teams.
Does this mean the Gators are in the company of Alabama, Georgia and LSU? Well, not exactly. Not when Kyle Trask is still coming into his own at quarterback, and not when the running game, absent that one long run byLamical Perineto seal the win, struggles to get anything going.

The Gators' defense is rock-solid, but the team as a whole has a lot to prove. The good news is they can do it in a hurry.

This past weekend was only the first step in sorting out the upper echelon of the SEC. From here on out, the conference in-fighting really gets going.

Next weekend, Florida goes to LSU, and Alabama goes to Texas A&M. Auburn travels to LSU two weeks after that, followed by Georgia-Florida the following weekend and LSU at Alabama the weekend after that.

So hold on tight. Time will tell whether Florida is a true title contender. Who knows? Maybe Auburn, with just one loss, will get back in the mix. -- Alex Scarborough

There is no slowing down Ohio State, which is looking more and more like a College Football Playoff team. The Buckeyes stand out at the top of the Big Ten, but Wisconsin has yet to falter and is seemingly on a path to meet Ohio State in the Big Ten conference championship game if both teams continue to play the way they have been.

Penn State is also proving to be one of the best teams in the conference and is putting on impressive performances on both offense and defense. Besides those teams, there are questions with the next tier, which includes Michigan and Michigan State, which are still trying to find offensive success on the ground. While the top of the conference has seemed to separate itself, at this point, there is a lot of football left to be played. -- Tom VanHaaren

Kansas State and Oklahoma State looked good until they didn't, as both took double-digit losses in Week 6. Texas Tech suddenly looks intriguing after it beat the Pokes behind a career performance from Jett Duffey.

Oklahoma's and Texas' pre-Red River Showdown matchups both were closer than those teams would prefer, but they emerged victorious nonetheless.

As we approach the midpoint of the season, there's plenty of movement still to be made behind the top two. -- Sam Khan Jr.

If you're looking for a viewing experience in which a few great teams will beat up on the rest of their conference, and eventually one -- maybe two -- will reach the College Football Playoff, then maybe the Pac-12 isn't your thing. But if you're looking for a league in which the narrative changes each week, and the teams at the bottom of the standings consistently compete with those near the top, and general weirdness occurs on a weekly basis, then the Pac-12 is very much what you're looking for. This week's big development was a change at the bottom: Oregon State's 48-31 win over UCLA digs the Beavers out of the cellar. UCLA looks capable of holding on to the No. 12 spot for an extended stretch, but -- like Oregon at the top -- it shouldn't get too comfortable. -- Kyle Bonagura
1. Oregon

Give the top three teams in the league off on the same weekend, and you get a taste of what this year's ACC is all about. It was awful and chaotic and beautiful, with Louisville and Boston College trading punches, Miami and Duke engineering crazy but ultimately fruitless comeback bids, and backup QBs reinvigorating offenses and Georgia Tech ... well, the Yellow Jackets played, too.
Perhaps this is the model for the conference at this point. It's not good, but at least it's interesting.

Is Pitt actually good or just lucky? Has Virginia Tech turned a corner with Hendon Hooker at QB? Is Wake a real challenger for Clemson? The beauty of the ACC is that almost anything seems possible.

Things get a little more interesting in Week 7, with Virginia going to Miami, Clemson hosting Florida State and Syracuse, and NC State battling to determine if one of them might not be all that bad. -- David M. Hale 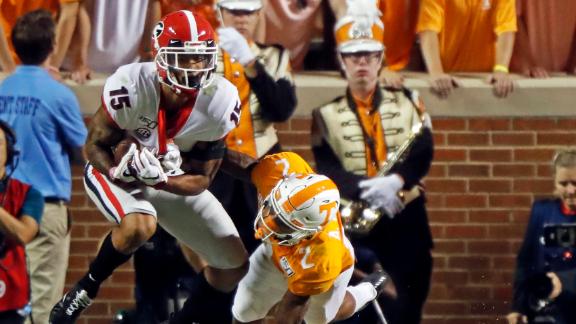 Georgia stays undefeated with balanced win vs. Tennessee
Georgia scores two touchdowns through the air, two on the ground and one on defense as the Bulldogs down the Volunteers to remain unbeaten. 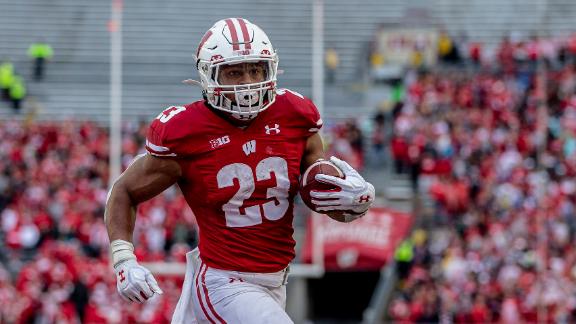 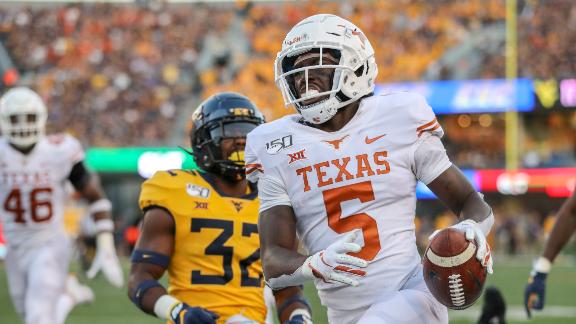 Kendall throws four INTs as WVU falls to Texas
Sam Ehlinger and Texas turn three of Austin Kendall's four interceptions into touchdowns as the Longhorns prevail for a 42-24 win over the Mountaineers. 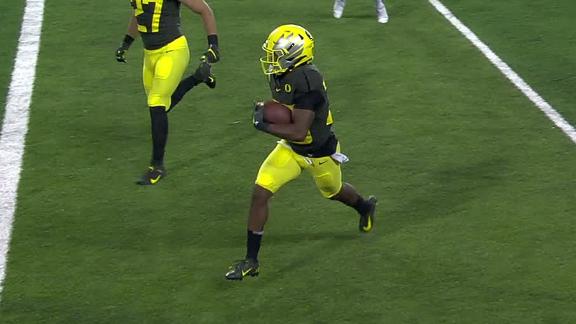 Oregon scores on slick fake pass
Justin Herbert fakes a pass to the right, then goes to the left as he finds Jaylon Redd for a 1-yard touchdown. 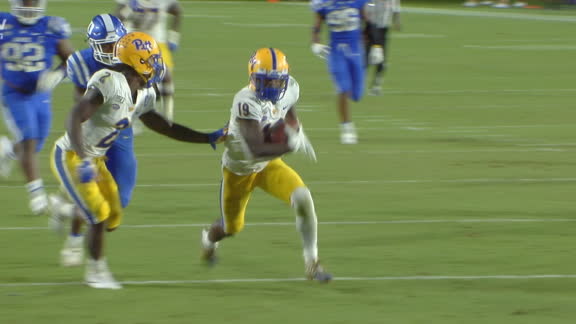