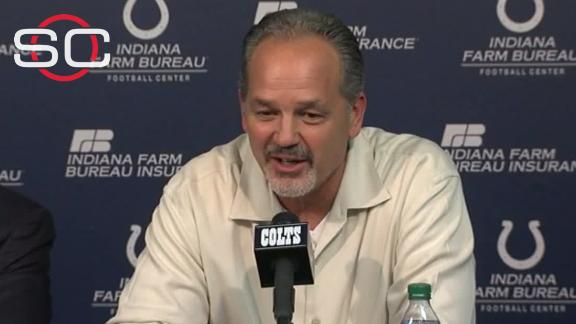 INDIANAPOLIS -- Chuck Pagano's determination to keep his job as Indianapolis Colts coach paid off when the team rewarded him with a new four-year contract late Monday night.

"I'm happy to announce that we are moving forward with Chuck as our coach," owner Jim Irsay said in a news conference. "It was something I was hopeful would be the case. We gave it careful consideration. Really, it was something, you know my focus was always on winning and going forward in the best way we can to win, and yes, continuity plays a role. It is important.

Pagano will be paired with general manager Ryan Grigson for four more years in Indianapolis, as Irsay also said Grigson was given a three-year extension so that he and Pagano are signed through 2019.

"They're going forward together," Irsay said. "Chuck made a point of that unsolicited alone in my office. I had no problem with that. These are our guys. These guys are ready. There's been a lot reported, a lot written. I know what the reality is, and this is definitely what's best for the Indianapolis Colts going forward. I'm sure of that."

The deals, for which no financial terms were available, came about after Irsay spent most of Monday meeting with Pagano and Grigson.

Pagano's coaching status had been in limbo since he turned down a one-year contract extension last spring after leading the Colts a step further in the playoffs in each of his first three seasons.

Pagano, 55, and the Colts dealt with adversity all season. Quarterback Andrew Luck missed nine games due to injuries, the Colts fired their offensive coordinator in Week 8 and they missed the playoffs for the first time since 2011.

"We've overcome a lot," Irsay said. "This year was tough obviously, 8-8 and falling short of the playoffs is difficult, but at the same time to be right in there with the injuries we had at quarterback, I'm proud of the organization, proud of the way we fought back, and I'm convinced that we have the right stuff on my right and left here going forward to win a world championship."

Pagano spent the final weeks of the season talking like a coach who was on his way out after four seasons.

But now he's locked in for four more years.

"I've had a lot of great days in my life, but none better than today," said Pagano, who is 41-23 in four seasons in Indy. "I'm grateful and thankful to Mr. Irsay and his family. Words can't describe how I feel right now. I owe it to Jim for believing in me."

"The players are thrilled that Coach got an extension," linebacker D'Qwell Jackson told ESPN's Josina Anderson. "I'm just overcome with joy that a guy like himself, that we love and want to play for, a guy that stands for family, faith and football, got another shot. Regardless of everything that happened during the season and all the injuries we had, that isn't where we, like, finish. I am super excited that he got another four years."

Pagano and Irsay spent most of Monday afternoon meeting at the team complex, and after several hours, team spokesman Avis Roper told reporters no announcement would come until at least Tuesday.

Before players started cleaning out their lockers, Pagano held this season's last team meeting. Players declined to say what specifically was discussed, but many acknowledged Pagano expressed "love" for each of his players.

"I'll tell you this, he's given his heart and soul every day since I've been here," Luck said. "I feel like I've grown so much as a player, as a person under him. Through this season, which became trying and disappointing, he's always been a sort of bastion of whatever that is of a good coach."