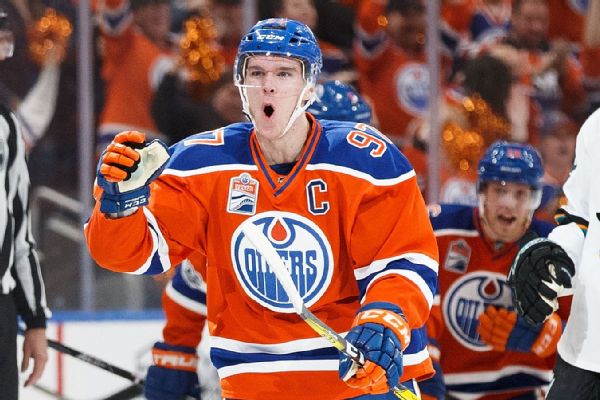 The first trophy of the NHL Awards show has been handed out to Connor McDavid.

The Edmonton captain won the Ted Lindsay Award, given to the most outstanding player chosen in a vote by NHL Players' Association members. The 20-year-old NHL scoring champion also is a finalist for the Hart Trophy as the league's MVP.

The 91-year-old Lindsay was on stage for the presentation, flanked by Mario Lemieux and Mark Messier.

The results of the expansion draft also will be revealed throughout the two-hour awards show. The Vegas Golden Knights begin play in the fall as the NHL's 31st franchise.

The annual awards show got underway with a performance by a Canadian rock band and a few jokes from emcee Joe Manganiello, who got laughs from a comedy bit in which he stepped into the crowd to move Sidney Crosby up to an improved seat -- by asking a grinning NHL commissioner Gary Bettman to switch seats.

Bergeron joined Bob Gainey as the only players to win the Selke four times. Bergeron also claimed the trophy in 2012, 2014 and 2015.

He has been nominated for the Selke six straight times, joining Detroit's Pavel Datsyuk for the longest streak in the award's history.

Burns is a first-time winner of the Norris. The heavily bearded big man with an aggressive offensive game scored 76 points to lead all defensemen.