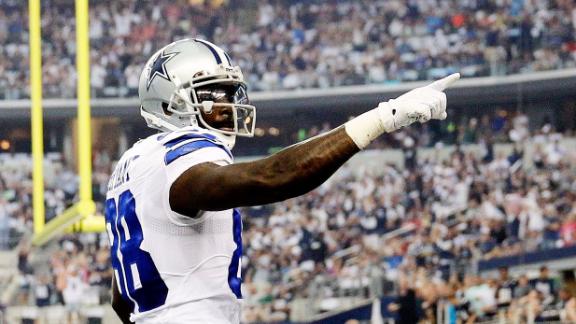 IRVING, Texas -- While the Green Bay Packers didn't challenge Seattle Seahawks cornerback Richard Sherman at all in the season opener and the Washington Redskins went at him three times Monday night, the Dallas Cowboys expect to go after him more than that on Sunday.

"With all of the respect we have for him, we're going to have to give him some business over there or we will hurt the balance of what we can do relative to certainly the passing game," Cowboys' owner/general manager Jerry Jones said Friday on 105.3 FM The Fan. "We can't run from him. That's easy to say and hard to do. We got to challenge him and make him at least cover us one-on-one, and Dez of course is the guy who can do it. So I don't see us compromising the rest of our offense by running from Sherman like that."

The Cowboys face Seattle on Sunday, and one of the bigger matchups in the game is Bryant against Sherman.

Bryant lines up mostly on the left side, where he's been targeted 17 times this season. But the Seahawks do play some man-to-man defense so there's a good possibility Bryant and Sherman will meet more than once.

"I know Deion [Sanders] was such a force for us, that people would run from him and it played right into our hands," Jones said in referring to the Hall of Famer cornerback who played for the Cowboys. "We had 10 people on nine players a lot of time because of Deion Sanders."

The Cowboys are not a team afraid of going after an opponent's best players on defense. Last week against Houston, the Cowboys ran at defensive end J.J. Watt regardless if he played off the edge or at tackle.

Sherman has allowed just one touchdown pass this season and was targeted three times in the Monday night game at Washington. It was the second-fewest targets at Sherman this season.

In Bryant's opinion, he's facing one of the best in the NFL.

"He's big, he can run, he got length, you've got to play big," Bryant said. "Like I said, you can't just think you're going to go in there and do this. You have to be well-prepared."