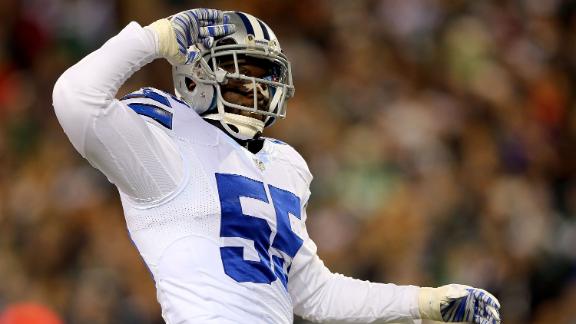 Linebacker Rolando McClain has accepted a one-year contract to remain with the Dallas Cowboys, the team announced Wednesday.

McClain will make up to $3 million in salary and bonuses and can earn an additional $1 million in playing-time incentives, sources said.

McClain, who faces a four-game fine for violating the NFL's substance abuse policy, chose the Cowboys' offer over another from the New England Patriots after visiting there earlier this week.

The 25-year-old McClain established himself as a capable playmaker with the Cowboys, finishing with 81 tackles, two interceptions and a forced fumble. He left both playoff games with concussions, and battled groin and knee injuries for much of the season.

With McClain shoring up the middle linebacker spot,Sean Lee will move to the weak-side spot in 2015. Anthony Hitchens, who started at every linebacker spot as a rookie in 2014, should be the leader at strong-side linebacker, but the Cowboys have other options, like Keith Rivers and Kyle Wilber if that doesn't work out.

After losing Leeto a torn anterior cruciate ligament in spring 2014, the Cowboys agreed to a trade with the Baltimore Ravens for McClain, who was the eighth overall pick in the 2010 draft by the Oakland Raiders. He had not played since 2011 after falling out with the Raiders, and retired twice.

He quickly moved into the Cowboys' starting lineup in training camp and finished second on the team in tackles despite being inactive for three games and not playing a fourth due to a knee injury. He proved to be a difference-maker on a defense that was without its best playmaker in Lee.