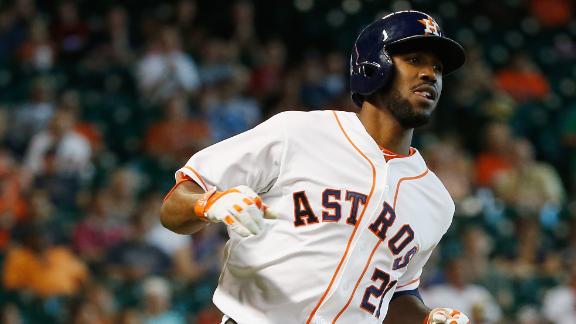 The Cubs announced the move on Monday.

Fowler, 28, hit .276 with eight homers and 35 RBIs last year in his only season with the Astros, who acquired him from Colorado for outfielder Brandon Barnes and right-hander Jordan Lyles. Fowler, who has a .271 career average, asked last week for $10.8 million in arbitration and was offered $8.5 million. He is eligible for free agency after the season.

"Our biggest needs were left-handed hitters and guys that get on base. Fowler fits that role for us," Hoyer said. "He controls the strike zone really well. It gives us much needed depth in center field and in the outfield. We felt we were a little unbalanced in our depth in the outfield as opposed to the infield.

"Hopefully we get a much more grinding offense going forward."

The 29-year-old Valbuena played third base primarily last year but also saw time at second. He hit .249 with 33 doubles, 16 homers and 51 RBIs. Valbuena agreed Friday to a $4.2 million, one-year contract and can become a free agent after the 2016 World Series.

Astros general manager Jeff Luhnow told the Houston Chronicle that Valbuena will compete for the starting job at third base.

"If a player isn't helping us win games ... we have other options," Luhnow said. "Valbuena will get a long, hard look at third base."

Straily, 26, was 1-3 with a 6.75 ERA last season in eight starts and six relief appearances for Oakland and the Cubs, who acquired him as part of the trade that sent Jeff Samardzija to the Athletics. He was 10-8 for the A's in 2013.

ESPN.com's Jesse Rogers and The Associated Press contributed to this report.