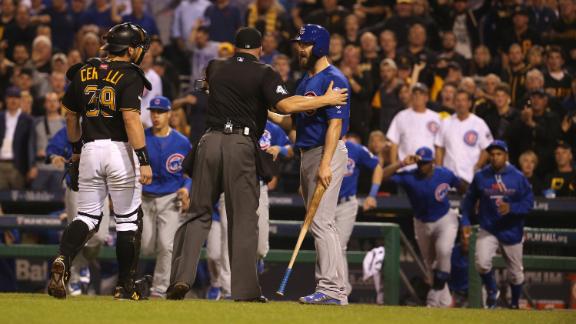 ESPN
PITTSBURGH -- The Pittsburgh Pirates struggled to get a hit off Chicago Cubs ace Jake Arrieta.

Pirates reliever Tony Watson drilled Arrieta on the left side with a fastball in the top of the seventh inning during Wednesday night's National League wild-card game. Arrieta and Watson exchanged words near home plate, and the bullpens and benches briefly emptied onto the field. The teams gathered around each other along the first-base line, but it appeared to be mostly pushing and shoving. Watson was issued a warning.

Pittsburgh utility player Sean Rodriguez, who already had been pulled, was ejected. Rodriguez took his frustration out on a water cooler in the Pirates' dugout, landing a couple of good blows in anger.

The Cubs were leading 4-0 at the time of the dustup, and the score held up, with Arrieta pitching a shutout. It was the first complete-game shutout for the Cubs in the postseason since Claude Passeau tossed a one-hitter in the 1945 World Series against Detroit.

Arrieta had hit two Pirates earlier in the game, although neither hit appeared intentional. He allowed four hits and struck out 11 without a walk.

"I hit two guys, unintentionally. I'm not trying to hurt or hit anybody," Arrieta said. "Balls were slick tonight. I just lost it a couple of times; it kind of ran away from me.

"I expected that. They're going to take care of their own guys. It's understandable. Everything after that was fine."

Watson said the Pirates were displeased when Arrieta hit Francisco Cervelli up high in the bottom of the fifth inning.

"Intent or not, anything up near the head, we don't like that," Watson said. "Neither team likes that."

Arrieta also hit Josh Harrison in the bottom of the sixth before the Pirates retaliated -- carefully.

"You never want to intentionally hurt a guy, especially a guy like [Arrieta, who's] out there having a historical second half and having a great season. So the butt's perfect," Watson said.

Watson attributed the skirmish to the high tension in the winner-take-all game.

"Everyone wants to win," he said. "That's their guy, and they got his back. Everybody's got everybody's back in these situations."

Rodriguez said that was what led to his involvement, and he accused Cubs catcher David Ross of grabbing him by the neck in the scrum.

"I just saw them come out of the dugout, so when I just went over to do what everyone else does, just make sure none of your teammates get into something, and I got grabbed by the neck," Rodriguez said. "Ross grabbed me right by the neck.

"He was choking me and pushing me back. What would you do as a man? It may be wrong what I did afterward, but I was pretty heated."

Rodriguez appeared to throw a punch during the scuffle. Ross said he would address the situation Thursday.

The Cubs advanced to the NL Division Series against the Cardinals, which starts Friday in St. Louis.

"It's tremendous for the city. It's been a while," Arrieta said. "Chicago's been waiting for this, but it's only step one."

Benches clear after Arrieta drilled by pitch
Pirates reliever Tony Watson hits Jake Arrieta with a fastball in the top of the seventh inning causing the benches to clear.