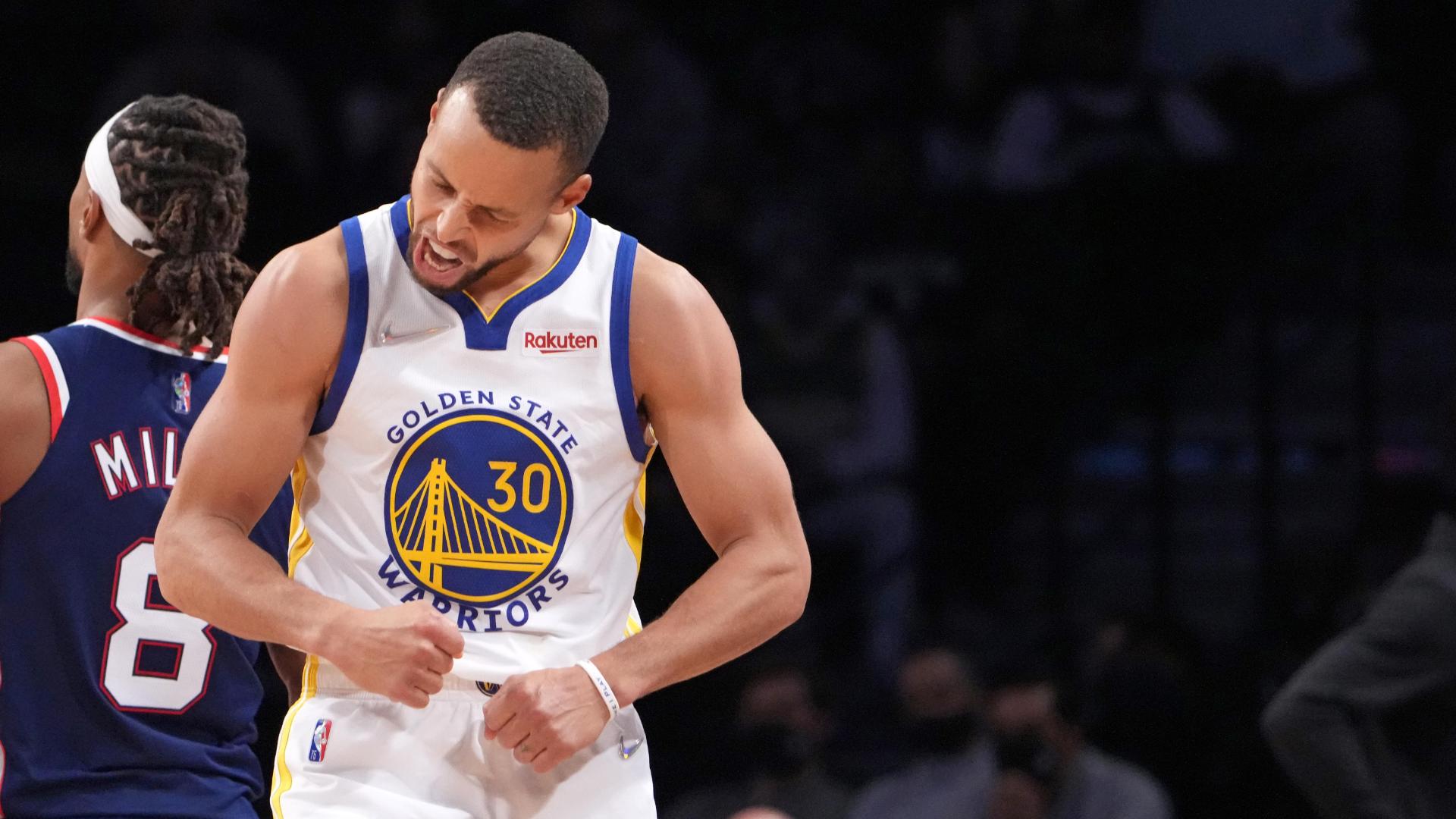 NEW YORK -- - Stephen Curry exited the court to one last chorus of "MVP! MVP!" chants, a sound that even he thought was weird.

It is, after all, Kevin Durant's home arena.


It was Curry's night, though.

Curry had 37 points, easily winning a matchup of the NBA's top two scorers when Durant had his worst night of the season, and the Golden State Warriors beat the Brooklyn Nets 117-99 on Tuesday.

A matchup with his former teammate had Curry revved up, as did the chance to bounce back from a loss in Charlotte on Sunday.

"So it's not the playoffs, but there's an intensity that you have to show up to beat a team like that," Curry said. "You thrive off that competitive atmosphere, knowing that there's a lot of talent on the floor."

Durant came in leading the league with 29.6 points per game, but he managed only 19, the first time all season he didn't hit 20. He shot 0 for 8 in the decisive third quarter and finished 6 for 19 after sitting the fourth.

"They got long defenders, guys that can help, so seeing bodies all the time when I had the ball, that's what great defenses do. And then some shots I wish I could've had back," Durant said. "I rushed a few once we got down 15, 20. I'm trying to get it back so fast you end up taking bad shots and rushed shots."

Curry almost caught his former teammate for the NBA scoring lead, making nine 3-pointers and raising his average to 28.7 per game. Durant dropped to 28.9.

Much of his struggles were due to the defense of Draymond Green, the former Defensive Player of the Year.

"I wanted that challenge," Green said, saying he was "pretty decent" with it.

He was way better than that.

"You can't do a better job defensively than what Draymond did tonight," Warriors coach Steve Kerr said.


Curry was 12 for 19 overall, with fans loudly cheering his long shots and giving him "MVP! MVP!" chants while Durant and the home team misfired.

Andrew Wiggins added 19 points for the Warriors, who improved their NBA-best record to 12-2.

James Harden scored 24 points for the Nets, who came home from a 5-1 road trip and fell flat in the nationally televised matchup. Durant won both meetings last season against the Warriors, his first playing for Brooklyn after leaving Golden State.

But this is a much improved Warriors team this season and showed it off during a dominant third quarter when they outscored the Nets 35-18 after a close first half.

Wiggins had the first two baskets of the third and Curry the next two, pushing a five-point lead to 71-58. Both had to go to the bench during the period with their fourth fouls, but the Warriors did some of their best work without them.

Golden State had an 18-5 run and held Brooklyn to just one field goal in a span of more than six minutes. Andre Iguodala beat the buzzer with a 3-pointer to end the quarter, making it 98-76.

Curry then made back-to-back shots from 30 feet early in the fourth to put it away.

The game was played at a high level at the start in front of a decidedly split crowd that grew louder with each make as Curry hit his first four 3-pointers. The Nets made their first six shots of the game and led 34-31 after one, with both Durant and Curry having 12 points.

Wiggins made 3-pointers for the final two baskets of the half, one at the buzzer giving Golden State a 63-58 lead.

Nets: Patty Mills made his first start of the season in place of Joe Harris, who has a sprained left ankle. Coach Steve Nash said Harris would probably miss a few games before his ankle was examined again. Brooklyn had used the same starting lineup in previous 11 games. ... Bruce Brown scored 14 points.

Kerr said Klay Thompson played 5-on-5 back in San Francisco on Monday and was expected to do so again Wednesday. The star guard hasn't played since the 2019 NBA Finals because of a knee and then an Achilles tendon injury.

Kerr was asked if Durant was a better player now than during his three seasons with the Warriors, when he was twice the NBA Finals MVP before rupturing his Achilles tendon in Game 5 of the 2019 finals.

"He was pretty damn good then, so he doesn't look any different to me and that's after an Achilles injury that kept him out for a year and a half," Kerr said. "So that's saying something. But I don't think you can tell he had an injury, given his ability, his speed, his explosion."