Damian Lillard after Blazers' elimination: Trying to defeat the Warriors became an obsession 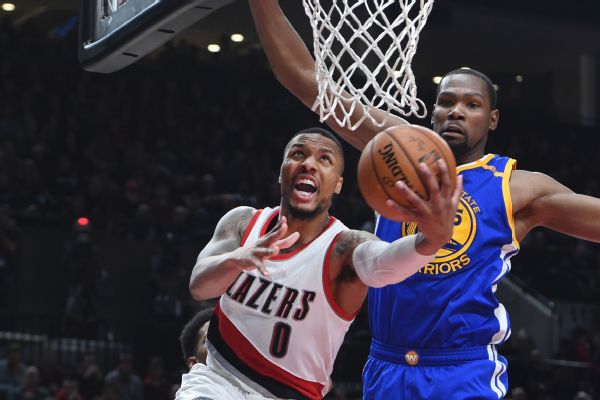 ESPN
By Chris Haynes
PORTLAND, Ore. -- After the Portland Trail Blazers were swept by the Golden State Warriors on Monday, point guard Damian Lillard told ESPN he's developed a newfound obsession with trying to take down the Warriors.

"You have to be obsessed with that because you know that they're so good that they're going to be there," Lillard said after a 128-103 loss in Game 4. "That's who you're going to have to get through to get to where you want to get to. That's what it is."

The Trail Blazers squeezed into the final playoff spot (41-41) after a disappointing start to the season. They were expected to take the next step after a 44-38 record during the 2015-16 season.

The two-time All-Star is proud of the team's push down the stretch of the regular season, but he said he's not satisfied.

"I wouldn't say it was a successful year," Lillard told ESPN. "We got tested, and I think we answered the bell. I felt like we showed our true colors by the way we fought. But I wouldn't say successful. I think it was growth. A year of growth for us."

In last year's playoffs, the Warriors bounced the Trail Blazers out of the second round in five games.

Lillard's anger was evident after Monday's lopsided loss. "I don't even know what to think right now," he said. "It's very frustrating. But you know me: I'm going to come back stronger than ever."

When addressing the media, Lillard spoke highly about how well the Warriors play together and how everyone is on the same wavelength. He has realized that the Trail Blazers must take a page out of the Warriors' book.

"You also got to understand that if you ever want to get out of the West, you're going to have to go through them," Lillard said during his media address. "And for me, I understand that's what it is. It's always been that way in the NBA. I think about when the Pistons were just beating up on [Michael] Jordan. [They] were just kicking his butt every year, and he had to get through them if he wanted to get to where he wanted to get to. That's just what it is. [The Warriors are] going to be there. They're going to be there every year. We have to look at that and understand that we got to be better. We have to go get better,and come back better as a group if we want to move past them."

Kevin Durant loves Lillard's competitive spirit. He told ESPN that the Trail Blazers are a few pieces from contending.

"I think they want somebody on the wing that can take the pressure off those two guards [C.J. McCollum and Lillard], somebody that's big for their position. But they're right there, man. They're a good team. They started off slow. I think they should have been a higher seed, but they fought their way to get in the playoffs. They have a future center in [Jusuf] Nurkic who took them over the top, but I think they need another ball handler on the wing to get them going. It's going to be fun playing against these guys in the next few years."
Related topics:
sportsespngolden state warriorsdamian lillardkevin durantcj mccollumnbaportland trail blazers
Copyright © 2020 ESPN Internet Ventures. All rights reserved.
More Videos
From CNN Newsource affiliates
TOP STORIES
SF police begin enforcing social distancing
SF businesses boarding up in fear of burglaries during shelter-in-place
Coronavirus Relief: Peninsula landlord waiving 2 months of rent for small businesses
Santa Clara County says homeless with COVID-19 have temporary shelter
Coronavirus: Stanford team has grim forecast for shelter in place future
Coyote season forces dogs off Presidio trials, as new alphas settle in
East Bay company to have hand-held COVID-19 testing devices ready by next month
Show More
Coronavirus: Lake County defies odds with no positive cases
Man, 4-year-old injured in Vallejo shooting, police say
Coronavirus: Morgan Hill restaurants trying to cope during shelter-in-place orders
Small business owners struggle to apply to new lending program
Fighting coronavirus: Help researchers solve the puzzle by becoming citizen scientist
More TOP STORIES News