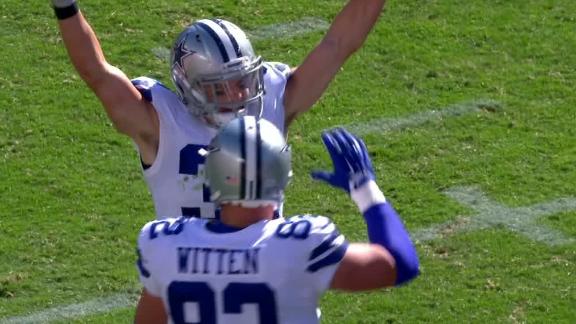 Bailey appeared to aggravate the injury in a first-quarter kickoff return. After Jason Witten's one-handed touchdown catch, the Cowboys went for a two-point conversion that failed, leaving them with a 20-3 lead in the second quarter.

Heath handled the kickoff after Witten's touchdown and sent the ball to the San Francisco goal line. He later kicked the extra point after Ezekiel Elliott's 72-yard touchdown catch.

"I didn't know how I was going to feel, but I was pretty nervous going in," Heath said. "I don't know why. I wanted to make them obviously. I didn't want to go out there and just look like an idiot, so I think I was a little nervous. Then with the rush, especially with this team, they have really bug guys that rush the field goal so I think I was kind of too fast on my first couple."

Heath added that playing kicker "was the most fun I had playing football in a long time."

"I knew he was going to nail it, we've seen it before," Cowboys quarterback Dak Prescott said. "He's done it at practice we had him ready for an emergency in time so we all were excited I think that just brought another energy boost to our sideline."

Heath was a kicker in high school and helped end a training camp practice this summer in Oxnard, California, with a field goal. Later in the second quarter, though, Heath was forced from the game briefly because of a left ankle injury that required extra taping.

"At halftime we worked with him and we felt more comfortable that we could try and execute those and I think for the most part he did a really good job, that's not an easy thing to do obviously," Garrett said of Heath.

Bailey, the NFL's all-time most accurate kicker, has not enjoyed his two trips to Levi's Stadium. He was bothered by back spasms when the Cowboys played here last year and missed one field goal attempt.