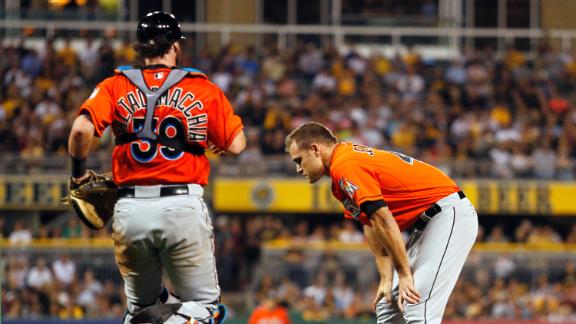 PITTSBURGH -- Miami Marlins relief pitcher Dan Jennings was hospitalized after being hit in the head by a line drive in Thursday night's 7-2 loss to the Pittsburgh Pirates.

Jennings, who came on in relief in the seventh inning, retired two batters before he was struck by a liner off the bat of Jordy Mercer. He momentarily stumbled before going to his knees after the play.

Marlins manager Mike Redmond said Jennings' eyes were open and he was responding to questions from the medical staff while on the mound. Jennings stood up to get in the cart.

After the game, the team announced that a CT scan on Jennings was negative. He was diagnosed with a concussion and was kept in a hospital overnight for observation.

Jennings put a hand up to acknowledge the crowd as he was driven away.

After the game, he took to Twitter and thanked the fans at PNC Park.

The scans were negative-it seems I'm going to be ok. The support shown tonight has been unbelievable, speechless. God is amazing

Jennings Hit In The Head By Line Drive
Reliever Dan Jennings was carted off after getting hit in the head by a line drive as the Marlins fell to the Pirates 7-2.
Related topics:
sportsespnjordy mercerline drivedan jenningsmiami marlinspittsburgh piratesthumbs uplinerhit in headmlb
Copyright © 2020 ESPN Internet Ventures. All rights reserved.
More Videos
From CNN Newsource affiliates
TOP STORIES