Daniel Carcillo back for Game 4 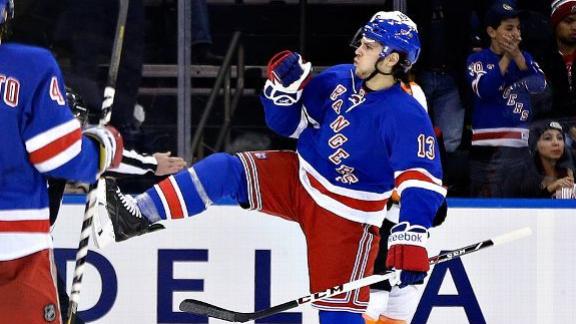 LOS ANGELES -- New York Rangers forward Daniel Carcillo will be able to play later in the Stanley Cup finals against the Kings after all.

Carcillo's 10-game suspension, incurred in Game 3 of the Eastern Conference finals against the Montreal Canadiens, has been reduced to six games, the league announced Tuesday. Since the 29-year-old winger already has served three games of his suspension, he will be eligible to return for Game 4 on June 11 at Madison Square Garden.

Carcillo was hit with the lengthy ban after striking an NHL linesman during Game 3 of the team's third-round series against the Habs. Carcillo appealed the suspension and met with NHL commissioner Gary Bettman on Friday in New York to seek a review.

After reviewing the incident, Bettman determined that Carcillo should have been punished for a violation of Rule 40.4, for deliberately applying "physical force to an official for the sole purpose of getting free of such official during or immediately following an altercation."

Carcillo was originally cited as an offender of Rule 40.3, deliberately applying physical force to an official, which carries an automatic 10-game suspension.