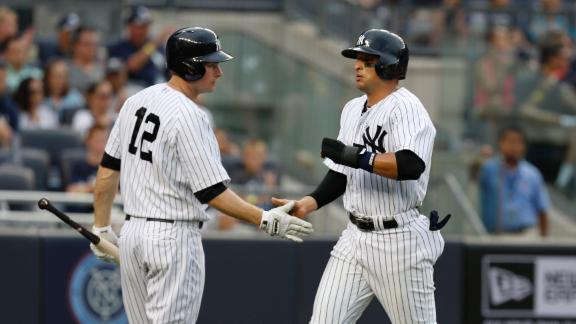 NEW YORK -- The Kansas City Royals suffered a potential blow to their rotation Saturday when Danny Duffy threw one pitch before being removed from a game against the New York Yankees because of left shoulder soreness.

"I go out in the pen and took a little longer to loosen up today than it normally does," Duffy said.

Duffy reacted awkwardly after throwing a 91 mph fastball to Yankees leadoff man Jacoby Ellsbury, prompting Kansas City catcher Salvador Perez to motion for manager Ned Yost and the trainer to come out of the dugout.

"I sat for five minutes before I got back out to the mound, and it just tightened up for whatever reason," Duffy said. "It felt like I had a vice grip on my shoulder."

After a brief conference on the mound, Duffy left the game and was replaced by Liam Hendriks. Hendriks allowed three earned runs over four innings in a 6-2 loss.

Duffy was sent back to Kansas City to undergo an MRI.

"I just have a good feeling about it," he said. "I feel like if it was really, really messed up, it would feel really bad right now. Right now, it is just achy."

Duffy, 25, has been a major contributor in Kansas City despite his 8-11 record. His 2.42 ERA is third best in the American League behind Chicago's Chris Sale and Seattle's Felix Hernandez. Duffy ranks sixth in the league with a 1.08 WHIP and is second to Hernandez with 6.50 hits allowed per nine innings.

"I do not think this is going to end my season," Duffy said. "I am important to this team, and I am going to do everything I can to get back out there."

Kansas City's rotation -- which has consisted primarily of James Shields, Jason Vargas, Yordano Ventura, Jeremy Guthrie and Duffy -- is fifth in the league with a combined ERA of 3.53.

The Royals have relied on strong pitching and one of baseball's best defenses to take the AL Central lead in a quest for the franchise's first postseason appearance since 1985.

Duffy broke in with the Royals organization as a third-round pick in the 2007 draft. He missed most of the 2012 and '13 seasons after Tommy John surgery on his left elbow.

Duffy became the first Royals starter to leave a game without recording an out since 1992 and the first starter in franchise history to not make it through the first at-bat of a game.