Dante Fowler Jr. likely out for season after first-day injury 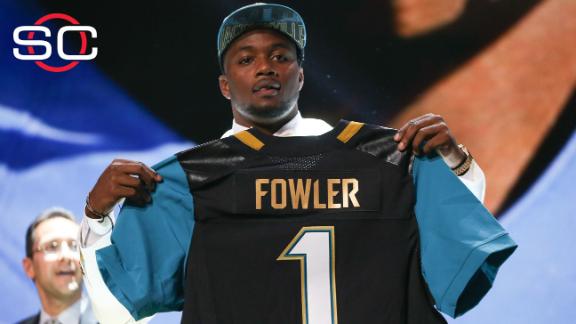 Jaguars rookieDante Fowler Jr., the No. 3 pick in the 2015 draft,tore his ACL on Friday when he went down less than an hour into the first day of rookie minicamp, the team announced.

After playing in every game in three years at Florida, Fowler is expected to miss the entire 2015 season.

The defensive end's left knee buckled during an 11-on-11 drill. He dropped to the ground, grabbed his leg as he rolled from side to side, and eventually got helped off the field. He was able to put some weight on the leg and was later carted to the locker room for tests.

Offensive tackle Watts Dantzler, who was engaged with Fowler when the DE went down, said he didn't know what happened to cause the injury.

"I really honestly have no idea," Dantzler said. "I was just kicking, got a punch on his shoulder, and he just went down. I don't really know exactly what happened. I feel terrible about it."

Fowler has not yet signed his rookie contract. His deal is expected to be worth about $23 million, fully guaranteed, over four years (with a fifth-year team option).

Unsigned draft choices participating in minicamp sign an injury protection waiver. If there is an injury, the team will continue to negotiate in good faith as if the player were not injured.

A source confirmed to ESPN that Fowler had signed a waiver.

The injury happened during a two-day camp that featured eight draft picks, nine first-year players and 28 workout players trying to get a shot at the NFL. Jacksonville had hoped to get all of them accustomed to the pace of practice and how to properly perform every drill.

Fowler had 14 sacks in three years at Florida, including 8 last season, and was the best player on a solid defense.

The Jaguars were counting on Fowler to be a centerpiece of their defense and a starter from day one.

Fowler took to Twitter to thank fans for their support and vowed to come back "better than ever."

The last top-three pick not to play the season after he was drafted wasCarson Palmer in 2003, according to the Elias Sports Bureau, while the last to miss the season to injury was Ki-Jana Carter in 1995. Palmer served as the backup quarterback during his rookie season, and Carter suffered a knee injury during the Bengals' first preseason game that year.

Schefter on Fowler's ACL injury
Adam Schefter discusses the impact of Dante Fowler Jr.'s knee injury has on the Jaguars' defense this season and what will happen with Fowler's rookie contract.