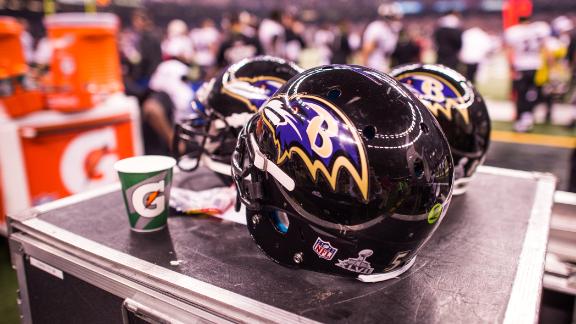 BALTIMORE -- The Baltimore Ravens' security director is accused of groping a woman and pressing up against her at the team's stadium after a December game, according to police and court documents obtained Wednesday by The Associated Press.

Charging documents filed in Baltimore City District Court said 48-year-old Darren Sanders is also accused of kissing the 34-year-old woman's neck and attempting to force her to grab his genitals.

Ravens senior vice president Kevin Byrne said Wednesday that Sanders has been placed on paid leave, per the NFL's personal conduct policy. He isn't with the team and won't travel to Pittsburgh for the Ravens' playoff game Saturday night.

Sanders had a role in the domestic violence case involving former Ravens running back Ray Rice, who is pursuing a grievance against the team over his release for hitting his then-fiancee in a casino elevator in Atlantic City. Sanders launched the team's investigation of the incident, and Rice's grievance centers on how much the Ravens knew about the situation while the team decided how to punish the player. Rice is seeking to recoup back pay beyond his initial two-game suspension.

The woman worked in security at M&T Bank Stadium and was asked to escort Sanders to his vehicle outside the stadium the same day the Ravens beat the Jaguars on Dec. 14, court and police documents said. Police were called and interviewed the woman several hours after the game ended.

A police incident report said the woman said Sanders made several comments to her while they walked together, that he'd seen here around and she "looked very pretty." The woman said he then grabbed her breasts and touched her buttocks, the report said.

"He hit and/or groped her buttocks more than once as they walked down the third level hallway," the woman told Baltimore police Sgt. Kerry Snead, who outlined the accusations in court documents.

The documents said after the grabbing and other advances, the woman told Sanders to get away from her and walked away, then told several co-workers what had happened. A witness also saw part of their interaction, the documents said.

"We are investigating this case thoroughly," Byrne said Wednesday.

Added NFL spokesman Greg Aiello in an email to the Baltimore Sun, which first reported news of the summons: "We have been looking into it."

Byrne said the woman is not a team employee. The Associated Press does not generally identify people who make allegations of sex crimes.

The charge against Sanders lists his address as that of the Ravens' team headquarters in Owings Mills, Maryland. Normally, defendants in a criminal case are required to list a home address.

Sanders' lawyers said he did nothing wrong.

"He is innocent and looks forward to his day in court," the firm of Alperstein & Diener said in a statement.

"Mr. Sanders has worked his entire career to keep others safe as a police officer and as a detective with the Baltimore City Police Department and currently as the senior security director for the Baltimore Ravens," the statement said. "He is a man who possesses tremendous integrity, and he has worked to ensure public safety by protecting the health, welfare and security of the community."

A spokesman for the Baltimore City State's Attorney's Office on Wednesday declined comment, saying the office does not comment on active cases.

In Maryland, a fourth-degree sex offense is the lowest level of such a charge. It's punishable by a maximum one year in jail and a fine of $1,000.

This year, Sanders launched the Rice investigation after being told by a police officer details of a video that showed Rice hitting his then-fiancee in an elevator.

Ravens owner Steve Bisciotti said in a news conference in September that the officer described the scene from video inside the casino to Sanders, who relayed the information to other team officials, including coach John Harbaugh and general manager Ozzie Newsome.

Sanders' first year as a full-time employee with the Ravens was 2004.

In 2004, Sanders was charged with bringing a concealed pistol into an Atlantic Coast Conference tournament game in Greensboro, North Carolina, where he was shot in the hip when the gun accidentally fired. Sanders, identified in archived accounts of the incident as an off-duty Baltimore police detective, was working at the game as a bodyguard for Bisciotti.

Sanders pleaded no contest to a misdemeanor charge of carrying a concealed gun, Guilford County clerk of court Lisa Johnson-Tonkins said. He received a prayer for judgment and was ordered to pay court costs. In North Carolina, a prayer for judgment generally is considered a conviction without a sentence imposed.