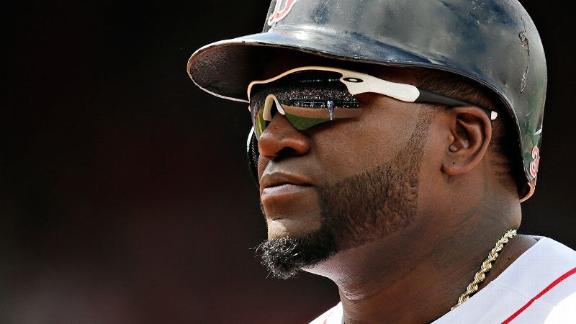 "Official scorers have a job to do, and by their very nature, their decisions don't make everyone happy," Torre said in a statement released by MLB on Friday. "But everyone in our game deserves respect. I hope that David will meet that standard going forward, because I don't share the same views that he expressed."

Asked about Torre's statement before Friday night's game in Oakland, California, Ortiz said, "I got no comment on that."

The call in question took place when Ortiz hit a sharp two-hopper just to the right of Twins first baseman Joe Mauer in the seventh inning of Wednesday's game at Fenway Park. The ball bounced off Mauer's glove and rolled a few feet away. The off-balance Mauer was unable to recover, and Ortiz reached first base safely.

After viewing a couple of replays, the official scorer, Bob Ellis, charged Mauer with an error. When the inning ended, Ortiz could be seen yelling at the press box, making a thumbs-down motion several times to indicate his displeasure with the call.

After the game, Ortiz was still fuming, saying he "thought people were supposed to have your back at home, and it never happens.

"It's always like that," he continued. "I've been here for more than a decade and the scorekeepers here are always horrible. This is home, man."

Torre took issue with Ortiz's contention that an official scorer should give some leeway to the home team in making decisions on hits and errors.

"Official scorers should never give any benefit of the doubt to the home team. We want their best judgment, based on the rules," Torre said. "We have a process to review the decisions that our scorers make. Even when there are inevitable disagreements, we expect everybody to act professionally and respect the game and the integrity of our scorers."

"I think the thing that could be said is any time there's a discrepancy, a dispute or differing of opinion, there's a process that the play can be forwarded for further review, and that's what we'll do with David's ball that glanced off Mauer's glove the other day," he said.

Farrell dismissed Ortiz's reaction as a slumping slugger blowing off some steam.

Ortiz, who is hitting just .188 this month, felt justified in venting.

"I've got to make it clear," Ortiz said Wednesday. "It's not my first rodeo, man. You know how hard it is to get a hit, man?"

It's not clear whether Ortiz was also fined.