David Ortiz thanks Yankees fans, says rivalry 'made me who I am' 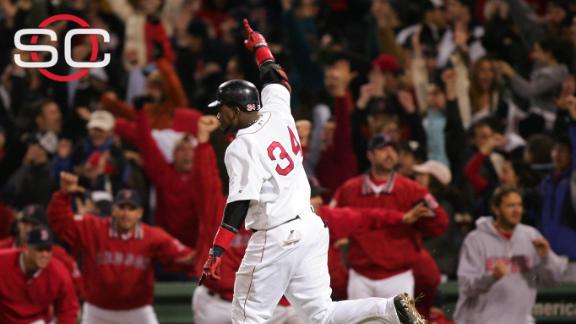 David Ortiz thanked New York Yankees fans, saying that they "pulled the best out of me" and even acknowledging "a little bit of love" for them as he prepares for his final series at Yankee Stadium.

But the Boston Red Sox slugger also offered a clear warning -- he's still going to try to "hit the ball all the way to the choo choo train," referring to the subway station outside the stadium.

Ortiz reflected on his role in the heated rivalry between the Red Sox and Yankees in an open letter published Tuesday on The Players' Tribune, saying the intensity of their games brought out the best in him and that he "was born to play against the Yankees."

"Our rivalry with the Yankees made me who I am," Ortiz wrote. "The intensity of that competition is what I'm gonna miss the most when I'm done. I could wake up in the morning and my body could be feeling like s---, but as soon as the bus pulls up to Yankee Stadium and I see that white fence on the upper deck, I'm like, It's on."

Ortiz, 40, is batting .321 with 37 home runs and 124 RBIs this season, which he says will be his last in the majors. He also said later Tuesday that he has no intention of playing for the Dominican Republic in the upcoming World Baseball Classic.

"I'd probably need 15 months to recover," Ortiz told the media Tuesday. "I would love to represent my country, but like I say, I'm in a situation where I'm trying every day to get ready to play a game. My body is so happy. My body is counting the days."

The first-place Red Sox (92-64) clinched a playoff berth last week and are contending for the best record in the American League and home-field advantage throughout the postseason.

But the Yankees (80-76) are on the verge of being eliminated from postseason contention, meaning their three-game series starting Tuesday against the Red Sox likely will mark Ortiz's final games in the Bronx.

"It takes me a long time to get my body ready for these games now," he wrote. "But I guarantee you this. When our bus pulls up to Yankee Stadium today, I'm gonna be ready to go."

Ortiz has spent the past 14 seasons with the Red Sox and has been a central figure in their rivalry with the Yankees, most notably in 2004, when he helped Boston erase a 3-0 series deficit in its historic American League Championship Series victory against New York.

His success in the Bronx, where he has 31 home runs in 114 regular-season games, has drawn the ire of Yankees fans, who routinely have booed the Dominican slugger. One fan even is attempting to organize a widespread mooning of Ortiz in the series finale Thursday.

"Let me tell you something," Ortiz wrote. "If 50,000 people moon me, I promise you two things. First, I'm gonna laugh so hard I might start crying.

"Then when the tears dry, I'm gonna step up to the plate and try to hit the ball all the way to the choo choo train. You gotta be careful. You guys don't have Mariano [Rivera] no more, you know what I'm saying?"

Though he may get booed inside Yankee Stadium, Ortiz said he's beloved on the streets of New York City.

"People are nice. I rarely bump into anyone trying to carry that out ..." Ortiz told the media later Tuesday. "People are super nice here. We have a lot of, what, 3 million Dominicans living here in New York. Most of them, I would say, are Yankee fans. I talked about it before, the relationship between Dominicans and New York Yankees. My people, they receive me just like I play for the Yankees. Much love. They know I play for Boston but I still represent with others, a Dominican coming into the stadium doing good things."

Ortiz explained that he channels his intensity for games in Yankee Stadium because of his experiences in his native Dominican Republic, where he says the Yankees are extremely popular and New York City is viewed as "the American dream."

He also professed his appreciation for the rivalry on multiple occasions, writing that "the intensity is just not the same against another team."

"The Red Sox let me be me," Ortiz wrote. "You see my beard? The Yankees wouldn't let me have that beard. I'd be shaving twice a day. But it goes beyond that. The Red Sox let me say what I feel. They let me be myself. If I was a Yankee, I'd be just like my boy, [Derek Jeter].

"But that's why I'm gonna miss this rivalry so much. Because we were perfect opposites. Everything we had in Boston, New York had an answer for it."

Information from ESPN's Scott Lauber contributed to this report.