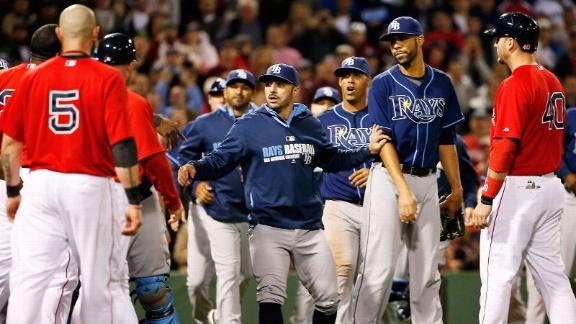 Red Sox pitcher Brandon Workman was fined and suspended for six games for throwing behind Rays slugger Evan Longoria five innings after Ortiz was hit. Workman, who is scheduled to pitch Wednesday night, is appealing his suspension.

"They fined him after what I said [Tuesday],'' said Ortiz, who had complained that Workman had been suspended while Price appeared to have gone unpunished for a pitch that Ortiz insisted was intentional.

The timing of when Price was assessed his fine is unclear.

Ortiz said Wednesday he had no interest in discussing the matter further, but on Tuesday had said he didn't expect any carryover when the teams next meet starting July 25 at Tampa Bay.

"Players from this point on need to be smart about how they go about their business,'' Ortiz said. "There are a lot of things, but one thing you don't want to do is put your team in a situation, you know what I'm saying?''