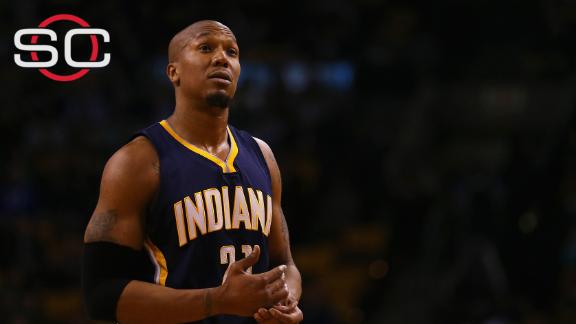 SAN ANTONIO -- The Spurs continued their run of good fortune Monday by luring free agent David Westfor whatsources confirmed to ESPN's Marc Stein's will be the veterans minimum of about $1.5 million for next season.

West spent the past four seasons with the Indiana Pacers, but he opted out of a deal that would have paid him $12 million for 2015-16.

The deal, which can't be completed until a signing moratorium lifts Thursday, follows Manu Ginobili's announcementearlier in the day of his return for a 14th NBA season.

The acquisition comes on the heels of the Spurs' bringing aboard highly touted free-agent forward LaMarcus Aldridge by way of a four-year maximum contract worth more than $80 million, which includes an opt-out after the third year.

West averaged 11.7 points on 47.1 percent shooting, in addition to pulling down 6.8 rebounds per game, the past season.

Sources said the Cleveland Cavaliers, Golden State Warriors and Washington Wizards all offered West more money, but he has made clear his desire to join a contender.

"At this point in my career, it's all about winning," West said in a recent interview with WTHR-TV in Indianapolis. "And again, I don't want to be in a position where we're just fighting to make the playoffs. I want to be in a spot where we can legitimately taste the Finals."

The Spurs would seem the ideal destination for West, considering they re-signed starters Kawhi Leonard and Danny Green to go with the acquisition of Aldridge. What's more, recent announcements confirmed the returns of veterans Tim Duncan and Ginobili.

The Spurs committed a considerable amount of salary-cap space to bring aboard Aldridge and re-sign Leonard and Green. Depth was a concern for the Spurs, given their limited cap flexibility. But West agreed to the cap-friendly deal.

After news spread of Aldridge's signing, San Antonio's odds to win the West improved to 2-1 at the Westgate SuperBook in Las Vegas, and the club is 4-1 to win the NBA title, behind only Cleveland, which is a 9-4 favorite.