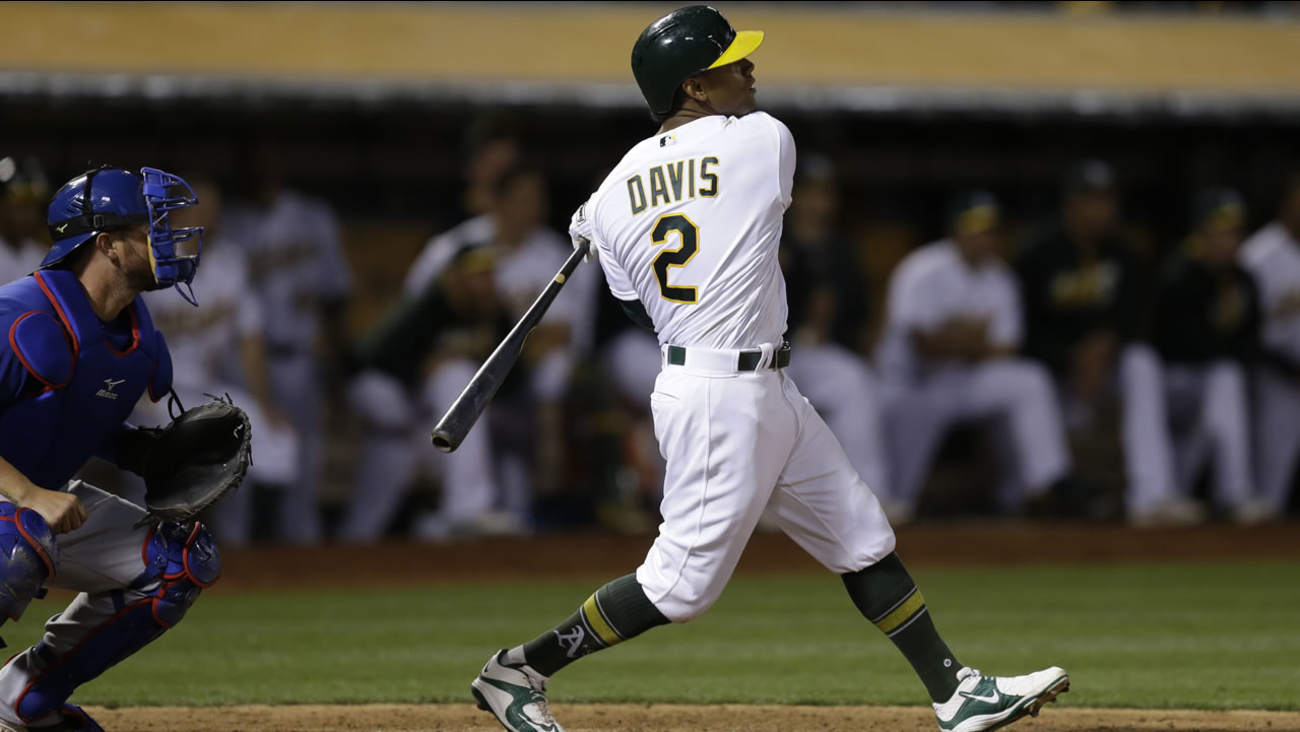 Athletics' Khris Davis follows through on a walk-off grand slam against the Texas Rangers during the ninth inning of a baseball game on May 17, 2016, in Oakland, Calif. (AP Photo)

OAKLAND, Calif. -- Khris Davis hit a game-ending grand slam with two outs in the bottom of the ninth inning for his third homer of the night, giving the Oakland Athletics an 8-5 victory over the Texas Rangers on Tuesday.

Ian Desmond hit a two-run homer off Ryan Madson (2-0) in the top of the ninth to put Texas ahead 5-4, but Davis and the A's weren't done.

Pinch-hitter Stephen Vogt reached on an infield single and went to third on Coco Crisp's double. Two outs and an intentional walk later, Davis launched a drive to left field off Shawn Tolleson (0-2), handing the Rangers' closer his fourth blown save.

With his excited teammates waiting at home plate, Davis stopped along the third base line and mimicked a pull-up jumper with his helmet as if he were Golden State Warriors star Stephen Curry next door in the NBA playoffs.

It was the first three-homer game for Davis, who matched his career high with six RBIs. Thanks to his power display, the A's recovered from Madson's first blown save of the year and won their third straight game.

Danny Valencia also homered and drove in a pair of runs for Oakland. Jesse Hahn, called up from the minors to make the start, gave up three runs and 10 hits in 6 2/3 innings.

The A's remain the only team in the majors without a starting pitcher who has lasted more than seven innings this season, extending their current streak to a franchise-record 78 games.

Oakland has 12 home runs in its last five games after hitting six in its previous 11.

Davis has 30 homers since Aug. 6, one more than Colorado's Nolan Arenado for most in the majors during that span.

Adrian Beltre and Nomar Mazara also homered for the Rangers. Every starter had a hit for Texas.