Davis: 'I think I should be there' 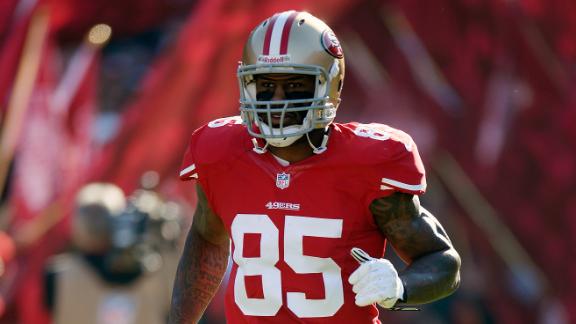 Tight end Vernon Davis wouldn't fully commit to returning to the San Francisco 49ers in time for their mandatory June 17-19 minicamp, but he indicated he knows the importance of it.

Davis, who has stayed away from the 49ers' voluntary portion of the offseason, is dissatisfied with his contract. The 30-year-old has two years left on the six-year, $42.7 million contract he signed in 2010. He is the third-highest paid tight end in the NFL.

"I bleed red and gold. I'm all about the 49ers. I love the 49ers," said on ESPN's "SportsCenter" earlier Thursday. "My dream is to retire as a San Francisco 49er. OTAs aren't mandatory, so I don't have to be there technically. I just decided not to go. I decided not to be there ... Everyone was just assuming I wanted a new contract. I just take it one day at a time. If they offer me a new contract, I'll gladly take it. I'll accept it."

The 49ers finalized a six-year, for quarterback Colin Kaepernick on Wednesday. Davis said he was "elated" for his teammate.

Along with Davis, 49ers guard Alex Boone hasn't been at the voluntary OTA session because he wants a new contract.

Vernon Davis Talks Contract
49ers TE Vernon Davis addresses his decision to skip San Francisco's voluntary OTAs, whether he wants a new deal, and Jimmy Graham's battle to be tagged as a WR and not a TE.