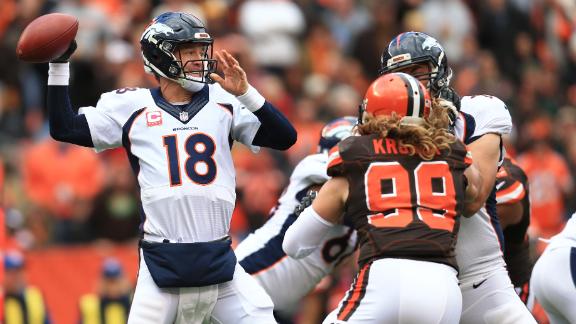 The Broncos are 6-0 but Manning threw three interceptions, moving his season total to 10. He also threw a well-placed dart to Emmanuel Sanders that turned into a 75-yard touchdown in the fourth quarter and was 4-of-4 passing on the winning drive in overtime.

Manning finished 26-of-48 for 290 yards to go with the touchdown and the three interceptions.

Several of Manning's teammates voiced their support for him after the game.

"We're here to rally behind him," running back Ronnie Hillman said. "Peyton is our leader, our quarterback. People can say whatever they want. They don't know. And this offense is right there. It's going to get going, and then people can ask about something else."

Hillman took to Twitter later in the evening Sunday to call out Manning's critics.

"We don't really care what people say," wide receiver Demaryius Thomas said. "I know I just got to make more plays and make people be quiet on it. Me dropping a ball, they probably say something about Peyton after that. ... I bet there are people that blame Peyton when I dropped the ball. He's our quarterback. Our leader. I know I can make more plays for him."

Coach Gary Kubiak, who has said previously Manning is not the only one to blame for the offense's issues, reiterated his support.

"He got us in position to win the game, and, obviously, he's got plays he wants back," Kubiak said after the win. "So that's a continuing process of me working with him and getting him as comfortable as I possibly can, and I know he's very capable of getting rid of those mistakes and hanging on to the great plays that he's making. He's our leader. He'll keep battling."

Sanders had taken up the theme earlier in the week, when, during an appearance on NFL Live, he said critics needed to "get off my quarterback."

"Look what Peyton's done with this team last few years, touchdowns and wins," Thomas said. "He's in a new offense, with a lot of new guys, new coaches, and we're still 6-0. I know I can make more plays for him. We all want to make people be quiet about that."

Broncos beat Browns in OT
Despite three interceptions from Peyton Manning, Denver holds off a late charge from Cleveland to win in overtime 26-23.