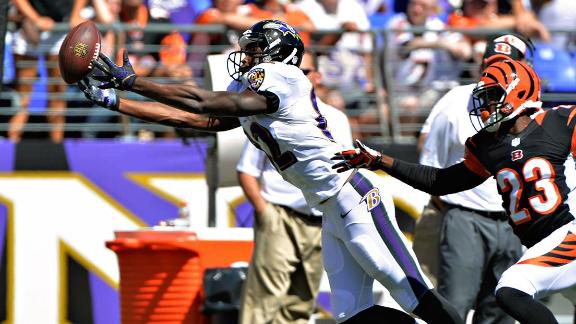 Free-agent wide receiver Torrey Smith acknowledged in an online post Sunday night that he will not be playing with the Baltimore Ravens in 2015.

In a classy and heartfelt goodbye to the organization and city of Baltimore, Smith thanked members of the Ravens, from owner Steve Bisciotti to his position coaches to his teammates. He also talked about how tough it will be to leave a city that he now calls home.

"I will be playing for a different organization, but I will remain committed to the City of Baltimore," Smith wrote. "I will continue to give back and help build a better future for our young men and women. MY COMMITMENT TO THE CITY IS FOR LIFE. This isn't a goodbye because I will still be around, and Baltimore will continue to be my home in the offseason and when my career is done. I'm on to the next chapter of my life and football career, but I will see you guys later."

Smith, who has been one of the players most involved in the community over the years, repeatedly said during the season he wanted to return to the Ravens. At the end of the season, he made it clear that he would like to re-sign with the Ravens before free agency began.

But Smith is expected to receive a contract that averages $8 million-plus per year, which is too expensive for a team with limited cap room to match.

"I literally dreamed of playing for the Baltimore Ravens, not just because it is a great organization with an amazing fan base, but because of the foundation of the team and the principles that the men who run it stand by and for," Smith wrote.

Smith, a second-round pick by the Ravens in 2011, finished as the franchise's third all-time leading receiver with 3,591 yards. He ranks fifth in career receptions (213) and second in touchdown catches (30).

A standout at nearby University of Maryland, Smith helped the Ravens to a Super Bowl two seasons ago. In the AFC divisional playoff win at the Denver Broncos, he burned cornerback Champ Bailey on touchdowns of 59 and 32 yards.

While he was criticized for never developing into a No. 1 receiver and having inconsistent hands, Smith will be remembered as the best deep threat in Ravens history.

"Although I may no longer be a member of the Baltimore Ravens, at heart, I will always be a Raven," Smith wrote. "What we accomplished together is timeless."

The San Francisco 49ers are considered the favoriteto sign Smith in free agency. One source, according to the Baltimore Sun, characterized the Smith situation as a "done deal with the 49ers," barring any unforeseen snags. The Indianapolis Colts and Houston Texans have also expressed interest in him.

Smith can sign with another team starting Tuesday at 4 p.m. when the league year and free-agency signing period period begin.

Smith Thanks Ravens, Voices Commitment To City
ESPN Ravens reporter Jamison Hensley discusses how the Ravens and the city of Baltimore will miss departing wide receiver Torrey Smith both on and off the field.
Related topics:
sportsespntorrey smithnflbaltimore ravensfree agentfree agency
Copyright © 2020 ESPN Internet Ventures. All rights reserved.
More Videos
From CNN Newsource affiliates
TOP STORIES
Some churches wait on CA order to reopen, others to resume in-person service regardless