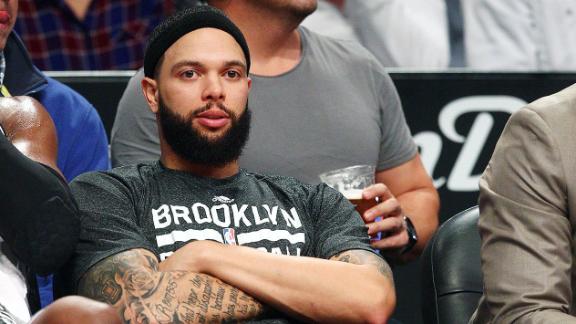 NEW YORK -- Brooklyn Nets point guard Deron Williams has a fractured rib and is out indefinitely, the team announced Thursday.

Williams underwent an MRI which showed a fracture in the left 12th rib. He will be re-evaluated in a week.

"Deron reported some soreness above this area over the weekend and as a result underwent imaging studies on Monday, which were negative," team physician Riley Williams III said Thursday in a statement. "Yesterday during the game he reported a new onset of symptoms below the prior area of soreness. New imaging studies done today demonstrated the fracture. There is no timetable for his return."

League sources told ESPN in December that the Nets and Sacramento Kings have had trade talks involving Williams, who underwent surgery on both ankles in the offseason.

Williams, 30, suffered the rib injury Sunday in Miami and missed Monday night's loss to Dallas. He returned in Wednesday night's loss to Boston, where he aggravated the injury after playing just four minutes and had to come out of the game. He is averaging 13.9 points and 6.3 assists this season.

He suffered a strained right calf Dec. 19 in Cleveland and missed two games as a result. He has been coming off the bench since, with Nets coach Lionel Hollins wanting the three-time All-Star to regain form and get his confidence back.

Jarrett Jack, who began the season as the backup point guard, has been playing better as the starter. In 10 starts, he's averaging 15.3 points and 5.3 assists on 47.2 percent shooting.

Jack, however, has had to log a ton of minutes with Williams unable to play. In his past two games, Jack has played 83 minutes. He was held out of Thursday's practice so he could rest. Hollins is concerned and wants to make sure he doesn't give Jack too much of a workload.

"I have to let up or Jarrett will be hurt," Hollins said.

The Nets are now much thinner at point guard with Williams out indefinitely. Darius Morris is their third point guard, though it's unknown if he can be counted on to play a bigger role. The Nets do have an open roster spot, so perhaps general manager Billy King will look to find additional help at the position.

Brooklyn has played the NBA's easiest schedule to date (.471 opponent winning percentage), but things are about to get much more difficult. Eight of the Nets' final 12 games in January are against teams with winning records. Brooklyn also faces the hottest team in the league, the Detroit Pistons, on the road Saturday night.