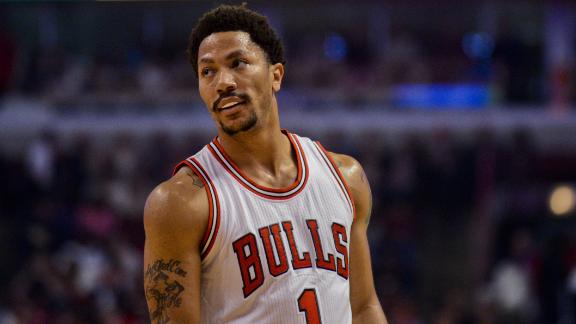 CHICAGO -- Derrick Rose is starting to look like his old basketball self again.


In just his third game back since returning from a meniscectomy, and his first home game in about a month and a half, the former MVP scored 22 points, recorded eight assists, grabbed six rebounds and had three steals and no turnovers as the Chicago Bulls beat the Philadelphia 76ers 114-107 on Saturday night.


"Every game I play is a stride," Rose said. "Every day I go in there and work out, do my rehab or training, it's a stride. It's a step forward. So every day is a positive day, even if I have a bad game or if I'm having a bad day, I try to erase it the next day."

Rose has played better every time he has stepped on the floor this week since playing 19 minutes in Wednesday night's loss to the Orlando Magic. The biggest difference in this contest is that Rose played more minutes -- almost 29 -- than the 20 he had been averaging in his first two games. Rose also got the feel of playing in the fourth quarter, something he hadn't done in the past two contests.


He doesn't seem to be surprised with how well he's seeing the floor, despite the fact he has missed so much time over the past few years. According to ESPN Stats & Information, Saturday's game marked just the fourth time in Rose's career that he had at least 20 points, five assists, five rebounds and zero turnovers. It's the first time he has accomplished that feat since the 2011-12 season.


"When you miss three years, damn near, you see everything," Rose said. "I'm just being patient a little bit more and there's no point in me forcing anything by the way that they're playing me. They're not double-teaming me, they're letting me do whatever I want to do, it's just all about me catching rhythm."


Rose's ability to space the floor for the rest of his teammates remains one of his best qualities. Teams know he still has the ability to get to the rim and penetrate when he wants to. While he is still taking too many 3-pointers -- he was just 1-for-5 from beyond the arc Saturday night, and is 2-for-14 from there since his return -- he was more aggressive going to the rim late in the game.


"Derrick is a superstar and that's what superstars do," Sixers guard Jason Richardson said of Rose's ability to take over the game late. "He's trying to get his rhythm back for the playoffs. He just went to work. He's a tough cover and he still has his quickness. He made some big shots and made a big pass one time. He's a superstar and he takes over games and that's what he did tonight."


Rose's performance gives the Bulls even more confidence heading into the final two regular-season games of the season. They visit the Brooklyn Nets on Monday night and host the Atlanta Hawks on Wednesday night.


With Rose back in the fold, and All-Star Jimmy Butler returning Saturday from a left calf injury, the Bulls are confident their best basketball is still ahead of them in what has been an up-and-down season.


"Derrick is a player that is special when it comes down to crunch time," Bulls big man Pau Gasol said. "He can make big plays, score big buckets, and I think defensively also he can stop guards with size. Tonight he got three steals, which I think is really important for us because we're at the bottom of the league as far as steals go and get extra possessions. So he adds a lot."

Rose looking like old self
Brian Windhorst discusses Derrick Rose's 22-point performance in just his third game back since returning from a meniscectomy and Rose's mood after the game.