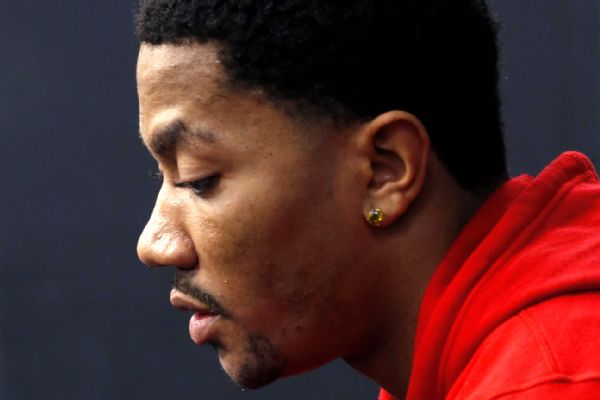 LOS ANGELES -- NBA star Derrick Rose testified Friday in a lawsuit accusing him and two friends of raping his ex-girlfriend, saying he interpreted a text message from the woman as consent to have sex with her later that night.

Rose said Friday he surmised that the initial text had triggered consent from that point on, and said his assumption was reinforced by their sexual history, sex acts she engaged in with him and one of his friends that night at his house, and an invitation hours later to her apartment.

"I was assuming that all of us going over there that she wanted to have sex with all of us," Rose testified.

His description of the incident differed dramatically from the woman's testimony, which lasted a day and a half in Los Angeles federal court.

The 30-year-old woman denied having sex earlier in the evening at Rose's Beverly Hills mansion, although she also said she blacked out and could only piece together the evening through short "flashes" of memory and by reviewing a flurry of text messages she was able to send despite being drunk and possibly drugged.

At the end of Friday's testimony, Rose's lawyer asked the judge to declare a mistrial because of a profane text message that he said the woman's lawyers had failed to reveal until Friday.

The judge said he would take up the issue Tuesday morning before the Knicks point guard is scheduled to resume testimony. The judge ordered Rose to return to the stand even if it means missing a preseason game the night before in New York.

Rose, 28, was called to the stand by the plaintiff's lawyer on Friday as a hostile witness to help make the plaintiff's case that the woman never gave consent to have sex with him and his longtime friends and assistants, Randall Hampton and Ryan Allen.

Consent is the main issue for the jury of six women and two men. The defendants, all friends since their adolescence in Chicago, have denied the allegations and said the woman consented.

ESPN is not naming the woman because it generally does not identify people who say they are victims of sexual assault.

Rose said the only time the woman said, "Stop," was after she let the three men into her apartment and they all headed for the bedroom together.

"She told us, 'One at a time,'" Rose testified. He said that he and Hampton waited on the sofa while Allen was in the bedroom.

The woman testified she never let the men into her place and remembers waking to see them all in her bedroom. She recalled Allen on top of her at one point and, at another, Rose pulling her to the side of the bed as she tried to roll off.

Rose said he never received any text message from the woman telling him she wanted to have sex with him and the two others. He said he assumed consent from what had transpired previously and the fact that she had never told him no.

"In my mind, she consented every time we had sex. Why wouldn't she do it that time?" he said.

The plaintiff's attorney, Waukeen McCoy, suggested Rose had no remorse about the night in question.

"I'm sensitive to it," Rose replied, but added, "I feel I didn't do anything wrong."

Rose hadn't seen the woman since breaking up months earlier but invited her over for drinks that night. She came with a friend, and after a shot or two of tequila, she became sexually aggressive, which turned him off, Rose said.

Rose retreated to his room, where he rebuffed further advances until a friend removed her from the room, he testified.

About 20 minutes later, he said, he walked outside and saw Hampton having sex with her by the side of the pool, and she pulled Rose over to join them, although he broke away and returned to his room.

Rose said the woman was acting a bit abnormally but he didn't think she was drunk.

Rose said he once had feelings for the woman and thought they had a bond. He was once asked whether he thought she was after his money.

"Not at that time," he said Friday.

The woman denied she was motivated by money in filing the suit, saying: "I didn't wish him any harm; I wanted him to be accountable."

The woman didn't report the incident to police until she filed suit more than two years later. Los Angeles police still have an open investigation.

Also Friday, Knicks coach Jeff Hornacek said he is unsure whether Rose will play in Saturday's preseason game against the Brooklyn Nets.

Hornacek said the decision about whether Rose plays will be Rose's. The Knicks have home games against the Nets on Saturday and the Washington Wizards on Monday.

"He has to take care of his business. If he's got to stay there and get it done, go through that process, and then come back and be focused on basketball, it's up to him," Hornacek said. "We're allowing him to take care of that. And when he comes back, we'll be ready."

Hornacek acknowledged that not having Rose around the team might affect his ability to learn the Knicks' new offense. He said Rose is missing the aspects of the offense that coaches have installed the past two days.

"He understands the game, so he should be picking it up pretty quickly," Hornacek said.