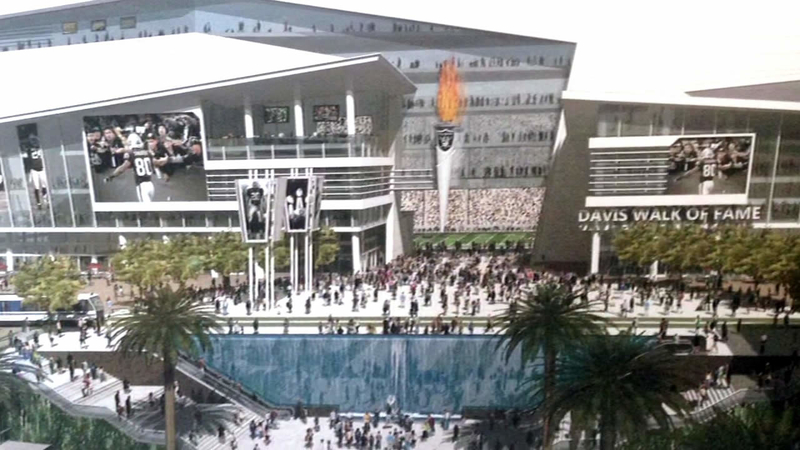 OAKLAND, Calif. (KGO) -- The head of an investor group that's hoping to build a massive development at the Oakland Coliseum complex that would include a new football stadium for the Oakland Raiders said Tuesday that the next six to eight weeks will be crucial in determining the project's fate.

Floyd Kephart, the lead executive of New City Development LLC, told members of "Save Oakland Sports," a group that wants to keep the city's three pro sports teams in town, that, "I'm going to play this game until sometime in the first of October."

Developer Kephart on "Coliseum City" efforts: "I will play this game...until the first of Oct."@Athletics @RAIDERS pic.twitter.com/hPoAAHd3CH

Speaking at a breakfast meeting at a restaurant in Jack London Square, Kephart said, "I made a commitment that I won't walk away until we see this through," referring to the proposed development called Coliseum City.

Kephart said right now the odds are 50-50 that he'll get the $4 billion Coliseum City built over the next couple of decades. One big issue is how to pay nearly half of the $900 million needed to build a new stadium for the Oakland Raiders. "We have done what we've been asked to do," Kephart said. "This is a 10 to 15 year development under the absolute best of circumstances and it will last for generations."

Even though Kephart said the odds that the plan will succeed are only 50-50 at this point, he insisted, "It can be done despite all the people who say it can't be done."

Kephart said the key to the investor group's plan is commercial development, saying it would make it economically feasible to build a new stadium for the Raiders, which is estimated to cost $900 million, as well as a new stadium for the Oakland A's baseball team and a new arena for the Golden State Warriors basketball team. "We have proposed that much of that come from a conduit bond that is supported by revenues from the stadium and revenues from the commercial development that would take place within Coliseum City," he said.

He said he's proposing that the city and county create an infrastructure financing district to channel the taxes from commercial development, which he estimates would be about $20 million a year.

Kephart said some of that money could pay for new sports stadiums, some could pay for affordable housing and infrastructure and some could help the investor group pay off the outstanding debt of more than $100 million at the Coliseum property.

Kephart said his group is also proposing that Oakland's three sports teams own their own facilities, which he said would be more economically feasible than having a third party own the sites.

In addition to new sports stadiums, Kephart said he envisions 380,000 square feet of retail that would include technology-based and education-based retail stores and 3,500 housing units.

He said his group's proposal is a long-term plan and will take at least 10 years to fully come to fruition.

But he said he knows it's important for the plan to get traction soon because the Raiders, who already are considering moving to Los Angeles, could formally apply to the National Football League in October if Oakland doesn't have a tangible plan by then.

The Warriors are planning to move to San Francisco in time for the 2018-19 season, but Kephart said he thinks the team would reconsider if it could own its own arena in Oakland.

Oakland City Councilman Larry Reid, who represents the East Oakland district where the Coliseum complex is located and is the chair of the board that oversees the Coliseum's operations, said Kephart "didn't say much" in terms of specific details in his presentation.

Reid said he's waiting to see what's in the documents the investor group submitted to the city and the county. "I'd like to see a plan that would take care of our sports franchises but wouldn't use a lot of public money," he said.