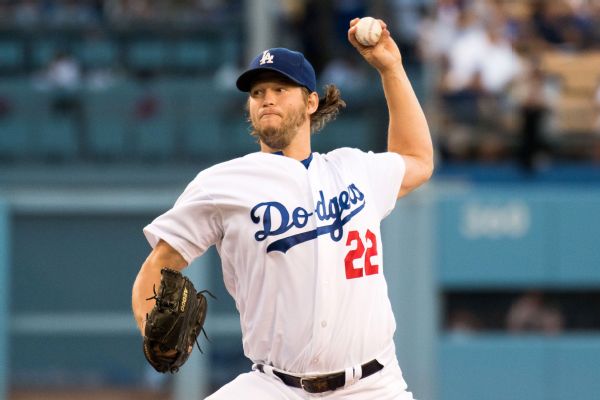 The Los Angeles Dodgers will start ace left-hander Clayton Kershaw on three days' rest in Game 4 of their NL Division Seriesagainst the Washington Nationals on Tuesday.

Washington, which leads the series 2-1, will start right-hander Joe Ross.

Kershaw was the winning pitcher in Game 1 on Friday, gutting out five innings and giving up eight hits and three runs. Kershaw was limited to 21 starts this season due to a back injury.

Rookie left-hander Julio Urias was originally slated to start Game 4 for the Dodgers.

According to ESPN Stats & Information, this will be Kershaw's fourth career postseason start on short rest. In the three previous starts, covering 19 innings, he has given up only four earned runs and struck out 23; the Dodgers went 2-1 in those games.

Ross, a 23-year old former first-round pick, was 7-5 with a 3.43 ERA in 19 starts for the Nationals this season, but he missed two and a half months after going on the disabled list in July with shoulder inflammation.

Since returning, Ross has averaged 68 pitches in three starts, as the Nats tried to stretch him out and get him ready for postseason action. In his most recent outing on Sept. 29, he threw 90 pitches in four innings.In 9 innings since coming off the DL, Ross has a 2.79 ERA and has allowed 14 hits, striking out 14 while walking three.

Nationals manager Dusty Baker was choosing between Ross and rookie Reynaldo Lopez for his Game 4 starter. Lopez, a hard-throwing righty who appeared in 11 games (six starts) for Washington but has yet to pitch in the postseason, will likely be the first man in from the bullpen in relief of Ross.