Dodgers' Clayton Kershaw on his return: 'It just wasn't a great night' 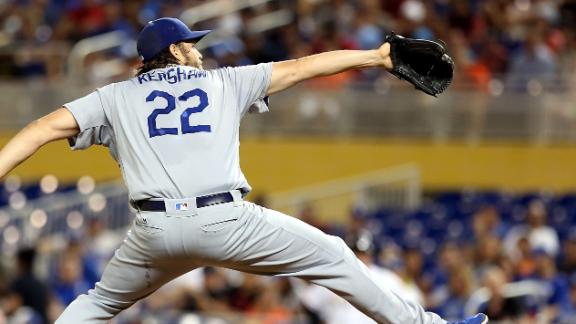 MIAMI -- The Los Angeles Dodgers welcomed back their ace with open arms as Clayton Kershaw took the mound Friday for the first time in 75 days.

Out since late June with a lower-back injury, the three-time Cy Young Award winner gave up two runs on five hits over three innings in the Dodgers' 4-1 loss to theMiami Marlins, throwing 66 pitches in the process.

It was not vintage Kershaw by any means, but the left-hander still recorded five strikeouts, striking out the side in the second inning.

He rated his outing as "not great."

"I threw a lot of pitches. I was averaging 20-plus pitches an inning, so regardless if the pitch count was in effect or not, it probably would have been a short night," Kershaw said after the game. "You try to look at the positives, and I got to pitch again, so that's good. But you don't want to be a detriment to the team, either. I'll definitely try and pitch a little deeper next time."

Despite the short outing, Dodgers manager Dave Roberts said he was happy to see his ace back on the mound.

"There wasn't the sharpness we expected, the slider wasn't there, but just to see him on the mound was great," Roberts said. "And in talking to him after the start, he came back into the dugout and said he felt good.

"Obviously every game is important, but for Clayton to be back on the mound, I think that's a win for us."

Kershaw needed 14 pitches in the first inning, 29 in the second and 23 more in the third. He gave up a solo home run to J.T. Realmuto in the opening inning and an RBI single to Chris Johnson in the second. Kershaw gave up three hits in the second inning, including a comebacker up the middle from opposing pitcher Jose Fernandez that knocked him to the ground.

Five of the last six outs Kershaw recorded were via strikeout. He exited trailing the Marlins 2-0.

Asked whether it was realistic for him to regain his old form after a 75-day lull, Kershaw said, "I don't get that luxury."

"It's not a perfect world, obviously. But at the same time, it's September whatever-it-is and we've got a division to win," he said. "While there might be some rough spots for me at times, there really can't be."

Roberts said Kershaw wanted to go back out on the mound despite his struggles.

"He wants to finish every game he starts. So that's what makes him great. There was a little discussion, but he understood this was in his and our best interest," Roberts said.

The short outing was not a complete surprise,considering the Dodgers are slowly building up his pitch count. In his only minor league rehab start earlier this week, Kershaw threw 34 pitches and then 15 more in the bullpen after his outing.

Before he went to the disabled list with a mild disk herniation, Kershaw was 11-2 in 16 starts with a 1.79 ERA and had 145 strikeouts to just nine walks.

It was the second time Kershaw has been on the disabled list in his career -- he also sat out more than a month at the outset of the 2014 season when he won both the National League Cy Young and MVP awards.

Kershaw admitted he briefly thought about whether he would ever come back.

"It definitely started creeping in my mind," Kershaw said. "But you can't really think like that. I probably pouted for a day and got over it.

"It was a little unfortunate that I couldn't get out there for a couple more innings. But the arm feels good. The pitches weren't great. But I don't think it was because I was tired or anything. It just wasn't a great night."