Dolphins DE Cameron Wake has torn Achilles, out for season 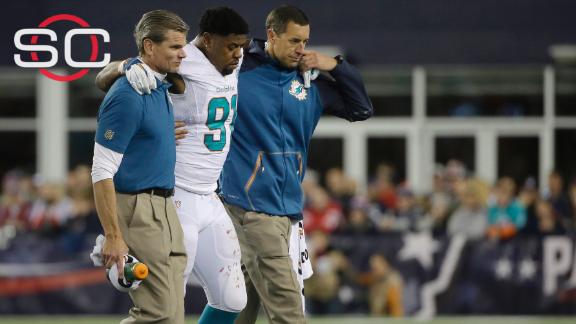 Wake was carted to the locker room after sustaining the injury in the third quarter of Thursday's 36-7 loss to the New England Patriots.

A disappointed Wake, on crutches and with a heavy wrap around his left foot, met briefly with the media after the loss.

"We'll get with the doctors and take it from there," Wake said several times.

Wake was rushing the passer when he found he couldno longer put weight on his foot. He stayed on the ground for a couple of minutes before being helped off the field by trainers.

Before the injury, Wake was on a tear. He sacked Patriots quarterback Tom Brady in the first half for his seventh sack in three games.

"I would feel horrible, and I know his teammates would, too, if that's the case," Dolphins coach Dan Campbell said after the game of the possibility of losing Wake for the rest of the season. " ... If you lost a guy like Cam, it would hurt. Not only is he a leader, but he's a very productive player."

The 33-year-old Wake, a Pro Bowler in 2010 and again from 2012 to '14, has been one of the few bright spots in Miami since the Dolphins signed him in 2009 out of the Canadian Football League, amassing 69 sacks among 208 tackles in seven seasons.

Cameron Wake a huge loss for Dolphins
ESPN NFL Insider Joe Banner breaks down what the loss of Cameron Wake, who suffered a torn Achilles, means for the Dolphins.