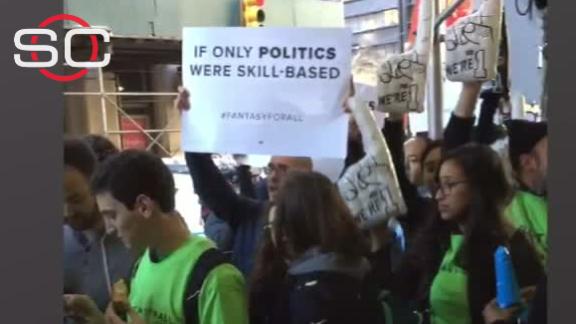 Less than three days after Schneiderman sent letters to DraftKings and FanDuel, the two DFS companies fired back with petitions arguing, among other things, illegal interference with their business operations and actions that would cause irreparable harm.

The two companies asked the court to provide it with the means to conduct their business in the state as the legal battle proceeds.

In its petition, DraftKings called Schneiderman's order to cease taking business from customers in New York a "shocking overreach."

"He has unleashed an irresponsible, irrational and illegal campaign to destroy a legitimate industry," the filing said.

Lawyers for both DraftKings and FanDuel spent most of their case arguing over Schneiderman's assertion that daily fantasy was a game of chance and therefore illegal.

The DraftKings petition says that Schneiderman's letter to them strangely mentions the fact that a small percentage of people win most of the money, which proves that it's a game of skill.

The company goes further, referencing a study by McKinsey & Company that suggested that 1.3 percent of the players who played daily fantasy baseball games up until the All-Star break won 91 percent of the money, which suggests that winning isn't in fact random.

In its petitions, DraftKings and FanDuel also allege that Schneiderman didn't just write the cease-and-desist letter to the two companies. Instead, his office contacted payment operators to encourage them to discontinue financial transactions to New York customers of the sites or face repercussions.

DraftKings said that as a result, one payment processor, Vantiv, told them it would no longer work with New York customers.

"FanDuel's business does not constitute 'bookmaking' under New York law because the underlying DFS contests are not gambling and because FanDuel does not stand to profit based on the results of those contests (or have any economic interest in one outcome over another, as a casino or bookmaker would.)," the lawsuit read.

"Anyone who asks us about the legality of online sports betting will be told exactly what we wrote in our letters: DraftKings and FanDuel are operating illegal gambling operations," said Matt Mitthenthal, spokesman for Schneiderman. "It should come as no surprise that companies associated with DraftKings or FanDuel are actively reviewing this matter in the context of business decisions."

Schneiderman issued a statement saying his next step will be to convince the court to enforce his wish for the companies to stop taking business from fans in New York.

"As a result, our office issued a cease and desist letter to stop them from violating state law by accepting bets from people in New York. Because both companies have refused to follow the law in our state, we will take action to enforce state law."