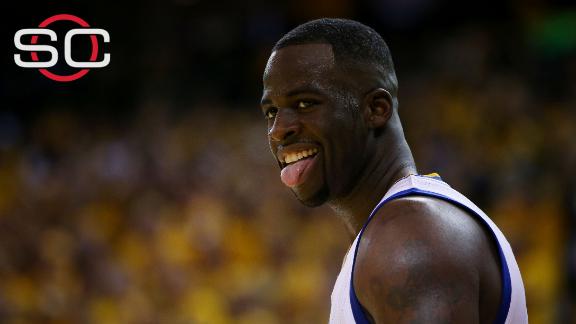 Draymond Green announced Wednesday night that he will re-sign with the Golden State Warriors on a five-year deal, with sources telling ESPN.com's Jeff Goodman the deal is worth $85 million.

"Proud to say that I'll be a Warrior for at least the next five years," Green said in a video posted to Bleacher Report. "It's been a long journey to get to this point. Always trying to overcome the odds, overcome doubters.

"To be in this position, signing back long term with the Warriors is amazing. It's an organization that I love, it's great being a part of, best fans in the NBA, first-class organization."

As a restricted free agent, Green would have been allowed to sign an offer sheet with another team but the Warriors would have had seven days to match the offer.

According to ESPN Stats & Information, Green would make more than reigning MVP Stephen Curryunder the agreement. In fact, Curry,who signed a four-year deal for $44 million prior to the 2013-14 season, will now be the sixth-highest paid player with the Warriors next season, trailing Klay Thompson, David Lee, Andrew Bogut, Andre Iguodala and Green.

After singing the praises of the chemistry and talent of the defending champions, Green said he's "ecstatic to say I'll be here for the next five years."

In the video, Green also thanked his old coaches, friends, family and his mom for their help and support over the years. He took to Instagram to show his mother's tearful reaction to finding out about his new deal.

He also performed well in the playoffs, averaging 13.7 points, 10.1 rebounds and 5.2 assists. Green recorded a triple-double in the Warriors' clinching Game 6 win over the Cavaliers.

Green's impact goes well beyond stats, though, with his tenacity, intensity and hustle all key elements of his game. He's a bit of a do-it-all utility power forward who can play multiple positions, shoot the 3 effectively and defend all over the floor. Green was the anchor of the league's best defense, with an impressive individual defensive rating of 96.0.

The Warriors selected Green 35th overall in 2012, landing an unexpected impact player in the second round. He appeared in 79 games as a rookie (one start), averaging 13.4 minutes per game, but burst out in the Warriors' first-round upset of the Denver Nuggets. He blossomed into a significant rotation player in his second season and built on that development to turn into a potential maximum-contract player.

As a second-round pick, Green has been one of the league's biggest bargains the past three seasons, making only $915,243 this past season.