Draymond Green says Warriors 'nowhere near a championship team' right now, but 'could grow to be ... 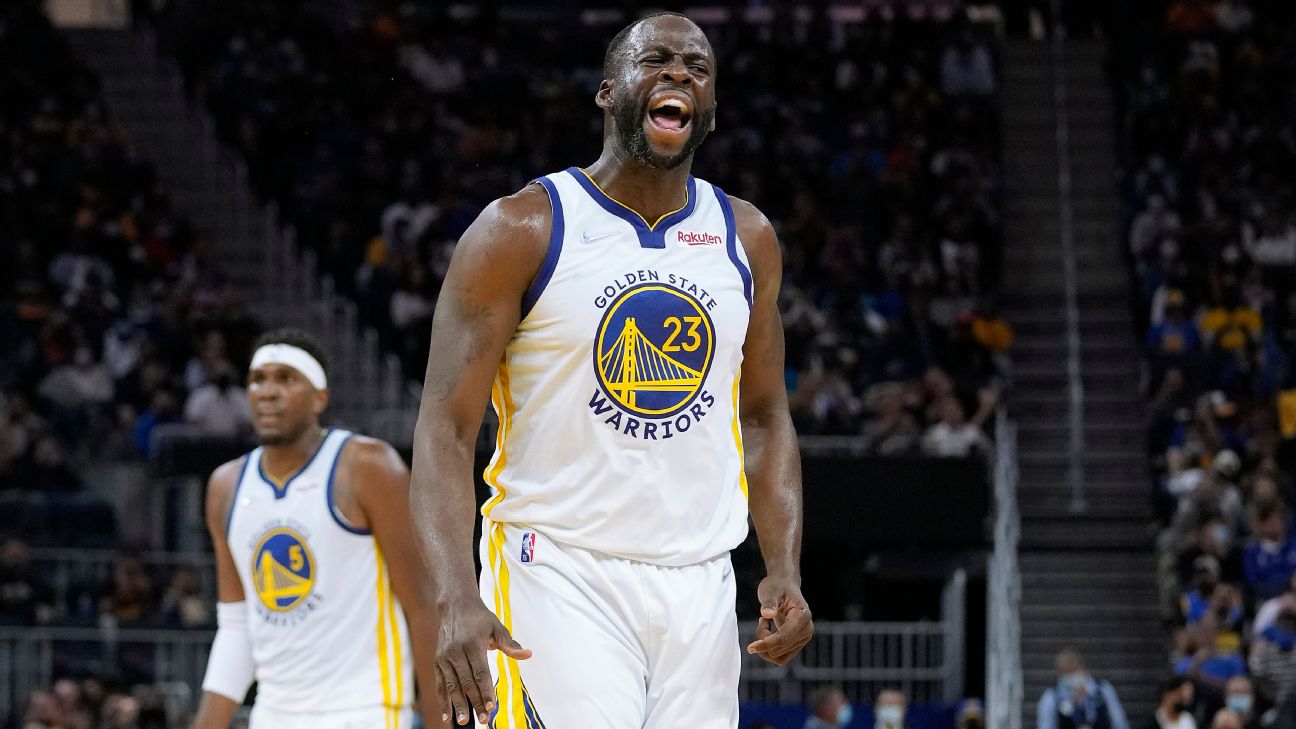 LOS ANGELES -- As the Golden State Warriors ready for the start of the 2021-22 NBA season, they do so with the renewed optimism of a team that hopes to rise back to the top of the Western Conference standings after failing to qualify for the playoffs in each of the past two years.

Warriors veteran forward Draymond Green is hopeful the young team can come together nicely, but he offered an honest assessment prior to Tuesday's regular-season opener against the Los Angeles Lakers at Staples Center.

Green has taken a softer stance than usual compared to years past, as the organization heads into an uncertain season that will be defined in large part on whether or not former All-Star Klay Thompson (ACL/Achilles rehab) and 2020 No. 2 overall pick James Wiseman (meniscus rehab) can return to the floor and contribute at a high level.

Green believes in the talent within the group, but also noted the "focus" and "dedication" needed for any team to come together at the highest level.

"You don't just win a championship because you think the pieces fit," Green said. "You don't just win a championship because you think you got good talent. You got to make that s--- work. And so do I think we have a good chance to be a really good team? Absolutely. But to say we can win a championship, we're so far away from that -- as is just about every other team in this league except maybe the Milwaukee Bucks because they're coming off that. Everybody else has a long ways to go and we're right there in that group that's going to be trying to create separation to be one of those teams that can contend in June."


Green admitted that after two straight disappointing seasons, he hopes the organization is feeling some more heat to turn things around.

"I think there better be some pressure on us," Green said. "You can't keep missing the playoffs. [We've] missed it two years in a row now. I could make a damn about making it to the playoffs. It's never my goal. It's not going to start being my goal today. You get in the playoffs you're trying to compete for a championship. So that's just the first layer; I hope that's not this organization's goal is to make the playoffs because it's for damn sure not my goal."

The Warriors came up just short of qualifying for the postseason last season, but dropped play-in games to the Lakers and Memphis Grizzlies that ended their season sooner than anticipated. Green, who won his second gold medal for Team USA at the Tokyo Games earlier this summer, said he didn't think about the play-in losses at all.

"It didn't motivate me at all actually," Green said. "I didn't think about it one time like, 'Damn, that play-in game, we f---ing lost.' I've lost way more important games [than that]. It didn't motivate me one bit. It didn't motivate me no more than just losing. I hate losing so that one didn't stick out more than any of the other ones. I just hate losing."
Report a correction or typo
Related topics:
sportsespnnewsgolden state warriorsdraymond greennba
Copyright © 2022 ESPN Internet Ventures. All rights reserved.
TOP STORIES
Gov. Gavin Newsom in LA after 'porch pirates' target cargo trains
Suspect shot, killed by police at SFO had replica guns, officials say
McConnell: Black people vote at similar rates to 'Americans'
Medicare not paying for at-home COVID tests for seniors
Adele postpones Vegas residency due to COVID among crew
FBI issues new warning on QR codes
Reporter hit by car on live television, but continued reporting
Show More
Search for missing Stanford nurse Michael Odell
American Airlines flight diverted over maskless passenger
Only one monoclonal antibody treatment is effective, NIH says
COVID-19 cases, hospitalizations plateau in SF but 'still high'
Researchers test pig-to-human kidney transplant in donated body
More TOP STORIES News