Draymond Green, Steven Adams at odds on intent of kick to groin 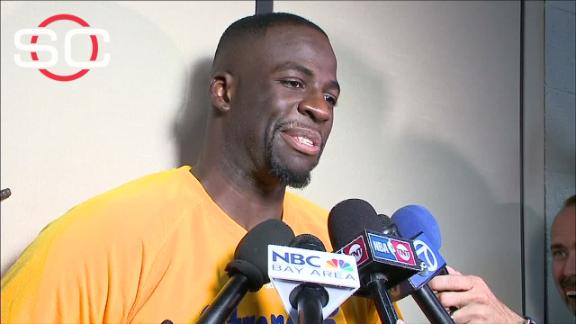 Kerr, in fact, said the flagrant foul 1 Green received after the first-half play should be reversed by the NBA -- as opposed to the All-Star power forward receiving further discipline.

"Stuff like that happens all the time," Kerr said. "There's contact, people's arms, legs flailing. If they think it's on purpose, play the game, you know. This stuff happens all the time.[Russell] Westbrookkicks his feet out on every 3, and there is contact. I mean, that's just part of thegame. So I don't understand how that can be deemed a flagrant 1. I think it should be rescinded."

Adams said he has a hard time believing it was a coincidence that he was hit hard by Green in the same spot in two consecutive games during the Western Conference finals.

"I mean, it happened before, mate," said Adams, who was kneed in the groin area while Green was shooting a transition layup during Game 2. "He's pretty accurate, that guy."

"Honestly, I think it's intentional," Westbrook said. "That's two times in the last two games. I don't think you can keep [hitting] somebody in their private areas."

The kick occurred with 5:57 remaining in the second quarter of Oklahoma City's 133-105 routthatgave the Thunder a 2-1 series lead.

Green told The Undefeated's Marc J. Spears that he intends to contact Adams and apologize, though he said that in the direct aftermath of the play -- and the game -- he was reluctant to do so and ultimately didn't because he said he knows "what type of guy" Adams is.

"If I go up to him and say, 'My bad,' he'll probably shrug me off," said Green, who scored six points on 1-of-9 shooting with four turnovers and a game-worst plus-minus of minus-43.

Green did not discuss the incident with Adams during or immediately after the game.

"I felt that there was no point in me going up to him and him doing that," Green said, according to Spears. "Because then that would really make me mad, especially knowing that I didn't do it on purpose."

After Adams fouled Green on a drive to the basket, Green's right leg swung and hit Adams directly between the legs -- "straight to the jewels," said Adams, who immediately went down on his knees and elbows in agonizing pain.

Kerr and Green were adamant that the forward's kick was accidental contact.

Sources tell ESPN.com's Marc Stein that an official ruling on Green's status -- whether he is suspended for Tuesday night's Game 4 in Oklahoma City -- is expected by the end of the day Monday.

"I followed through on a shot," Green said. "I'm not trying to kick somebody in the men's section. I'm sure he wants to have kids one day. I'm not trying to end that on the basketball court. That don't make sense. I brought the ball over the top this way [makes motion], he fouled me, and I brought my leg up. I mean, I know my core's not strong enough to stop my leg halfway from wherever it was going.

"But like I said, I thought it would get rescinded because I'm not trying to kick him. I was following through on the shot, and my leg went up. So no, I don't think I'll get suspended. I don't know how anyone could possibly say I did that on purpose, regardless of the way it looked."

There is precedent for a one-game suspension. Several players have been suspended one game for striking an opponent in the groin, most recently Cleveland Cavaliers reserve Dahntay Jones, whose one-game suspension for hitting Toronto Raptors center Bismack Biyombo in Game 3 of the Eastern Conference finals was announced Sunday.

Former Dallas Mavericks star Jason Terry had to sit out Game 6 of a 2006 West semifinal series against the San Antonio Spurs after punching Michael Finley in the groin, an act that went unnoticed by referees.

"I'm not here to say whether or not it was intentional," Thunder coach Billy Donovan said. "I don't know. But obviously, it's happened twice in the last two games, and that's something the league will take a look at. I'm sure they'll look at probably precedent or things that have happened in the past, and they go through it."

Green acknowledged that it would be difficult for him to believe the two shots to the groin area were accidental and coincidental if the roles were reversed.

"This one, I probably wouldn't believe it, from the way it looked," Green said. "But once again, I brought the ball over, I got fouled this way, my body went that way, and the right leg went up. So it's really not what I believe if a guy did it to me. I know what happened. Once again, I'm not trying to kick a guy where he got kicked."

Adams, who said he was in so much pain that he "shed some tears, actually," declined to say whether he thought Green should be suspended.

"It's not my call, mate," said Adams, whose team closed the half with a 24-5 run that started with the free throws he was rewarded due to the flagrant foul on Green. "Just moving on right now. We've got another game coming up soon. The other dudes will give you an answer on that, mate."

Was Green's kick intentional?
Draymond Green reacts to kicking Steven Adams below the belt and says, "I didn't know I hit him." Russell Westbrook disagrees and says, "It looks intentional to me."

Kerr: Green kick looked inadvertent
Steve Kerr tells reporters he felt Draymond Green accidentally kicked Steven Adams in the groin area and that the league should rescind the flagrant foul 1 that was assessed to Green on the play.