Draymond Green to Jordan Bell: 'We're trying to get rings over here' 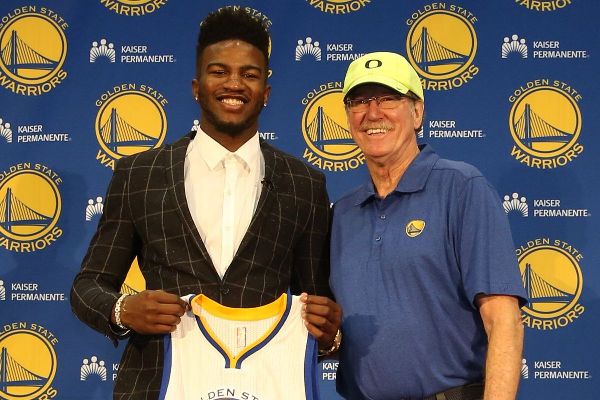 OAKLAND, Calif. -- Jordan Bell knows he will most certainly get an earful from Draymond Green come training camp as a Golden State Warriors rookie.

Green came looking for him on draft night with a FaceTime attempt after acquiring his new teammate's digits from general manager Bob Myers. But Bell was out with friends celebrating being drafted and didn't answer Green's call because the number was unfamiliar.

Bell said he decided he would text back instead.

"I was like, 'Who is this?' " Bell recalled Friday, when he was formally introduced and given his new No. 2 Golden State jersey at team headquarters.

"He didn't reply, so I called the number and said, 'Who is this?' Then he was like, 'Yo, I FaceTimed you. Hang up right now and FaceTime me right back. Don't call me,' " Bell said. "I FaceTimed him, and he didn't answer. I was like, all right. I waited like five seconds, and I called him back FaceTime, and he answered ... and we started talking about it. He was like, 'Enjoy this night, celebrate. it only happens once, but after this time we have to get back to work. We're trying to get rings over here.' "

The NBA champions began the night Thursday without a draft pick but acquired Bell in a trade with the Bulls. A 6-foot-9 forward and Pac-12 Defensive Player of the Year out of Oregon, Bell was the 38th overall selection by Chicago.

Bell had been upset he dropped so far in the draft, but then everything changed once the Warriors made a move for him. Green was drafted 35th overall out of Michigan State in 2012 and still has a chip on his shoulder about it. In fact, he can name every team in order and its selection above him that draft year.

"Draymond will be a fun challenge for you," Myers said. "Draymond texted me as I was driving home, and he said, 'What the' and then expletive 'is your problem?' to me. So you can fill in the blank. Then he said, 'I have to hear about this' expletive 'on the internet. You didn't' expletive 'tell me about it.' So I couldn't text and drive, so I called him and I said, 'OK, all right, calm down.' "

Green demanded he be able to talk to Bell, so Myers obliged with the new rookie's contact info.

Green's teammates are accustomed to his intensity. He even yells at them from time to time.