Draymond Green: Warriors had 'elephant in room' in Kevin Durant 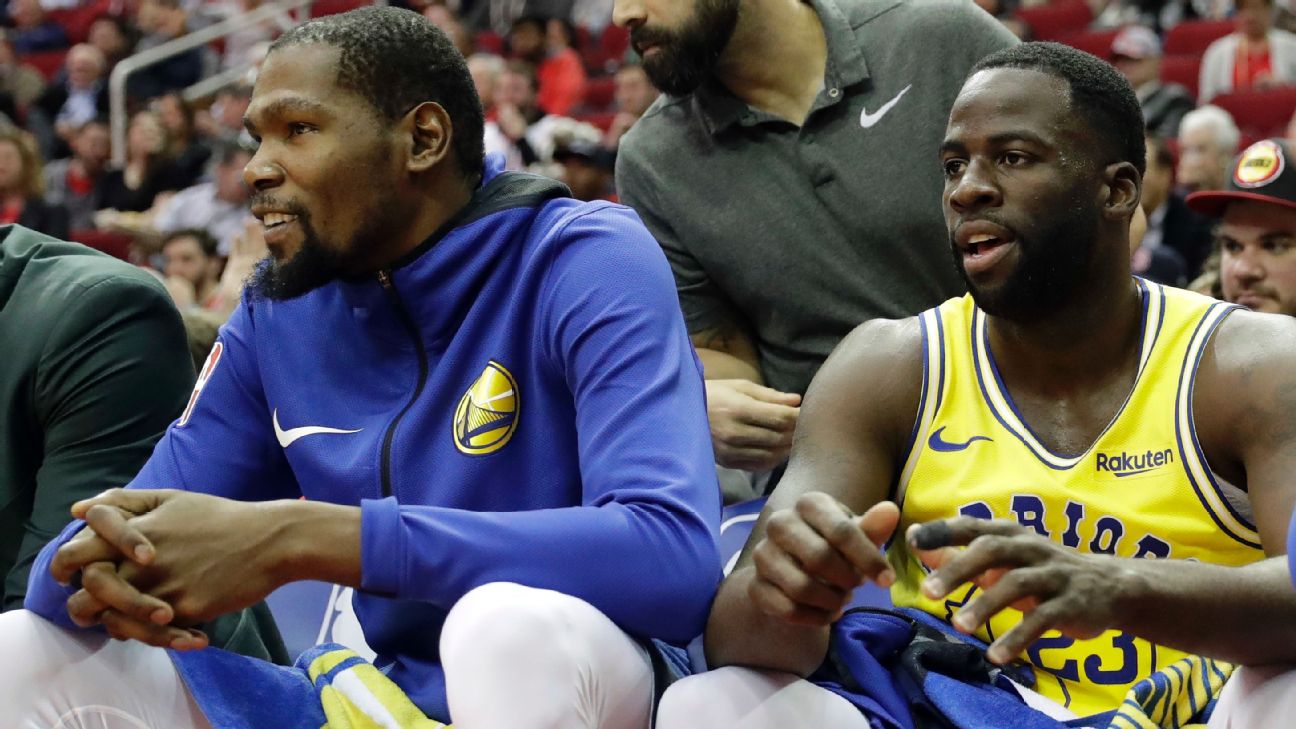 As Draymond Green watched the first two parts of "The Last Dance," the proud Golden State Warriors forward saw parallels between the end of the Chicago Bulls' run with Michael Jordan in the 1990s and the end of the Warriors' run last season with Kevin Durant.

"It definitely hit close to home," Green said on Uninterrupted's "WRTS: After Party" show with Paul Rivera and Maverick Carter, which was posted Monday. "Ironically, our season was the 20-year anniversary of that season. And we have a very important piece of our season, who was a piece of that season, which was Steve Kerr. I think Phil [Jackson] did what was great, which is acknowledge the elephant in the room. Because all year, if Phil doesn't do that, all year everyone else is dealing with that somewhere. And whether it's coming in questions [from the media], so now once you get these questions from the media, we've already addressed that as a team. We really don't need to talk about that. And our season was a little different from the standpoint of it was contracts, but it was on players. It wasn't necessarily the organization."

A reflective Green opened up about the internal strife that hovered around the Warriors all of last season as they waited to see what Durant would do at the end of it.

After watching how the Bulls handled the various issues they dealt with before and during the 1997-98 season, Green compared it to the Warriors' dealings with Durant last year. When the season started, the Warriors had hope that Durant would opt to re-sign with the team with which he had won two straight NBA championships, despite widespread speculation that he was going to sign with the New York Knicks at season's end.

That hope diminished as the season progressed, especially after a verbal altercation between Durant and Green during and after an overtime loss to theLA Clippersin early November. What bothered both Warriors players and coaches throughout the season was that they were constantly asked what Durant woulddo when the campaign ended, and Durant never publicly committed to a decision -- a fact that Green expounded upon during the show.

"But you can't just leave the elephant in the room, because what happened was the question came to us every day, like every time we spoke to the media, Klay and myself was asked about our contract," Green said. "It was strictly due to Kevin, because while that was going on, Klay was saying, 'I want to be a Warrior forever. I want to be here. We started this thing. This is where I want to be.' I'm saying, 'Yo, I want to be here for my career. We started this, we built this, I want to finish my career here with the guys I started it with.' And then you kind of had Kevin, [saying] like, 'I don't know what I'm going to do next year, and it don't matter'; but it does matter, because you're not the only person that has to answer that question.

"To be quite frank with you, you're honestly the last person that has to answer the question because you don't really say s---. Like, you don't say much to the media. If anything, you tell them to shut the f--- up. Well, I don't tell them to shut the f--- up. I kind of have a conversation, and so I'm stuck answering that question all the time. And due to that, there was always an elephant in the room amongst us, as opposed to with [the Bulls], they didn't have that elephant.[General manager Jerry Krause] had said it was Phil's last year. Phil had told them this was the last dance. Mike already said, 'Well, if Phil ain't coming back next year, I'm not either.' So everybody knew it was Mike's last year. They didn't have that elephant. Whereas I think we had a huge elephant sitting in the room, and Steve was trying to address it as best as he could, but it was kind of out of his hands."

The relationship with Durant and the friction it caused was one of several topics Green tackled between sips of wine. Using that last Bulls season as a point of reference, Green discussed how tough it is to repeat as an NBA champion. In the process, he admitted that the 2017-18 Warriors team with Durant was a far more talented group than teams in previous years, but it lacked the focus to dominate on a nightly basis.

"If our 2015-2016 team completely locks in and say, 'Listen, we are locked in, let's go play this game,' and the 2017-2018 team say, 'We locked in, let's go play this game,' [the 2017-18 team wins by] 20 points, easy," Green said. "And [2017-18] was a much better, more talented team and, when we're locked in and clicking, a much better team. But the thing about that 2015-2016 team was we were always locked in, and we were always clicking. There was never really a moment we weren't locked in. There was games -- we lost nine games. That's absurd. So you figure nine of those games, seven of them we probably can't hit a shot. Really, more than that because we even won games because of our defense because we couldn't hit a shot. You win 73 games, you're going to have a lot of nights where you don't hit shots. We were still able to hit those games. But you figure also some of those games is someone is shooting lights-out. Some guy who doesn't really score is going off. And so you take all of that into account with that 2016 team. But the 2017-2018 teams were so much better than that team, but because we were so much better, we were never really locked in at all times."

The 2015-16 Warriors team won an NBA-record 73 regular-season games, eclipsing the 1995-96 Bulls' mark of 72 wins; but unlike the Bulls, the Warriors didn't close the deal in the playoffs, losing to the Cleveland Cavaliers in seven games in the 2016 NBA Finals. It was after that season that Durant left the Oklahoma City Thunder and signed with the Warriors as a free agent.

"So the first year Kevin was here, which was 2017, we spent the beginning of that year trying to figure it out," Green said. "And we lost on Christmas Day to the Cavs. That's whenKyrie [Irving]hit the shot over Klay, like midpost area. And Kevin andSteph [Curry]was kind of having this, it wasn't like beef, it was just kind of like, 'You take it. No, you take it. I don't want to step on your toes.' After that, Kevin, when we lost that Christmas Day game, Kevin told Steph, 'Yo, I don't need you to just look for me. I'm fine. I'll get it. I need you to go be you.' And when he did that, we took off. And so you figure, just with the beginning of that season, you can't get to 73 wins just how that season started off. And then in 2018, once we finished 2017 as champions, we come back in 2018, we know no team's going to beat us. And so we're not taking that regular season serious.

"There was literally games during 2018 or times during the season where we're like, 'Yo, let's go lock in on this game.' And if we said we're going to lock in, we'd beat somebody by 30. But we didn't do that all the time. At times, we were just showing up, and we're still going to win because we're just better. But we weren't necessarily locked in because we knew how good we were. That 2015-2016 team, we had to fight for everything we got at all times. It wasn't like that [later]. We were so good, we didn't have to fight, and so the focus was never the same with those later teams, but we were way better."

Although he acknowledged that it is "way tougher" to repeat as champions, the Bulls' struggles to find their footing at the beginning of that 1997-98 season clearly resonated with Green.

"I think the one thing I got in watching this was some s--- just don't change," Green said. "I'm watching this, and it looked like you switched the head on some of the bodies, and you just switch the jersey. It's the same s--- over again. In watching that, I learned more about Pip [Scottie Pippen] than I did necessarily about MJ. Obviously, MJ is the glorified one. We've kind of heard all of the MJ stories for years. But I learned more about Pip today than I did about MJ. Just that struggle, though, of trying to do it again and again and again. I've had all these conversations with our guys about keeping your foot on somebody's neck, and you give someone that hope -- you can even go to the series of us and the Cavs [in 2016], and all of a sudden, we're up 3-1. All they need is a little bit of ... Game 5, they was toast. They were toast coming into Game 5, but you get a little bit of hope, and that's all you need to then move forward. So that's kind of what that was reminiscent of is just giving somebody a little bit of hope. But I really learned a lot about Pip in these first couple episodes, more so than MJ."

Green said he also enjoyed watching Kerr speak in the documentary and realized that his coach imparts wisdom that he learned from Phil Jackson and the Bulls more than two decades ago.

"It's super dope seeing him in this documentary," Green said. "Seeing [his son] Nick Kerr on his neck, I thought all of that was super dope. Just kind of seeing the history. I remembered a lot of this stuff from growing up, and just to kind of see it replayed and know where he is today. And also to see the similarities in his coaching style and Phil's or some of the things you could see, like, 'Wow, he pulled some of that stuff from Phil and kind of added his own touch to it.' Or to even hear his interview where he talked about 'our rhythm isn't the same.' I've heard him say that a million times to us. And it sounded like he was just standing in our locker room coaching. That was super dope to me, just to kind of see him in that aspect."

Green noted how interested he was when the documentary revealed that Jordan played golf with Boston Celtics guard Danny Ainge between Games 1 and 2 of the first round of the 1986 Eastern Conference playoffs, given how many former NBA players criticize this era's players for being too friendly with one another.

"The crazy thing about that is ... I've heard so many of the older guys talk about, 'Oh, this guy's working out with that guy' or 'Why are they friends?'" Green said. "I've always thought the s--- was ridiculous when they speak like that or even think that way; I think it's f---ing pathetic. But to see that, and MJ, [whom] they all got the utmost respect for, who bust all of their ass every single night, was golfing with Danny Ainge in the playoffs. This isn't even a regular-season game. This is in the playoffs after losing Game 1. [Jordan] is arguably the most competitive player to ever play the game of basketball. He's golfing with the opponent. I don't know, man, that [story] caught me off guard for sure. I had to rewind it in that moment and made sure I f---ing heard it correctly." 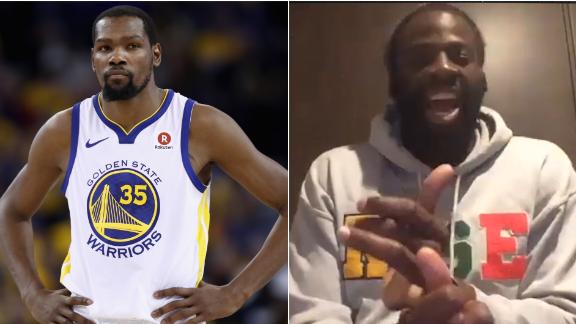