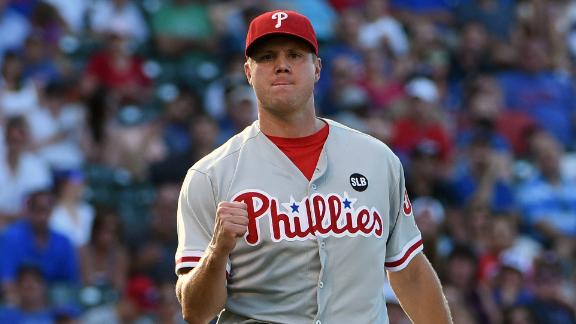 ESPN
Drew Storen wasn't ready to talk about the Nationals' blockbuster trade for Jonathan Papelbon or their consequent decision to demote him into a setup role.

The Nationals acquired Papelbon from thePhillieson Tuesday and wasted no time announcing that he will take over closer duties from Storen, who has a 1.73 ERA and hasconverted 29 of 31 save opportunities this season.

Nationals general manager Mike Rizzo said he talked to Storen about the trade and indicated that the right-hander was taking it well. But Storen, 27, offered a different perspective after Washington's 4-1 loss to the Marlinson Tuesday.

"All I'm going to say is that I'm aware of the move, and I've talked to Mike about it and talked to my agent and we've had some ongoing discussions, and until those have progressed, I'm going to leave it at that and no comment for now," Storen said. "As the situation goes, I'll keep you guys posted."

Papelbon, 34, said he wouldn't accept a trade unless he remained a closer, and agreed to waive his no-trade clause after getting the assurances he needed from Washington. Storen will shift to primarily a setup role.

"Papelbon is our ninth-inning pitcher," Rizzo said. "Drew will pitch the ninth inning at times when Papelbon is unavailable and be our setup guy in the eighth inning as we are constructed today.

"[Papelbon] hasn't pitched too many three-days-in-a-row stints. We're going to be careful with him, and we feel that we've got two terrific, elite ninth-inning guys who can close out games in pressure situations."

Nationals manager Matt Williams echoed Rizzo's sentiments about Papelbon, who posted a 1.59 ERA and 17 saves in 37 games this season with Philadelphia.

"[Papelbon is an] All-Star closer, been in pressure situations his whole career, so we're happy to have him," Williams said.

Papelbon is a six-time All-Star who has a 1.00 ERA in 18 career postseason appearances. He closed out the 2007 World Series for the Red Sox.

Storen, on the other hand, has an 8.44 ERA in six career postseason games. He also had a memorable meltdown in the decisive Game 5 of the 2012 NLDS, when he allowed four ninth-inning runs in Washington's 9-7 loss to the Cardinals.