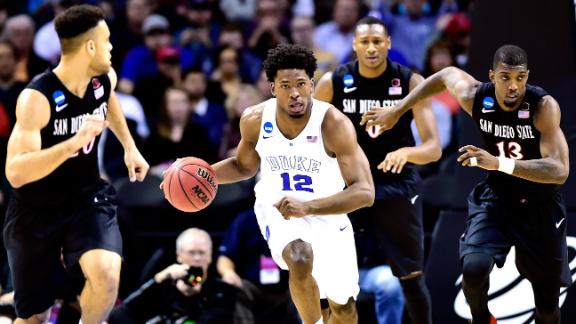 The school released a statement on Tuesday afternoon.


"We're very happy for Justise and his family," Duke coach Mike Krzyzewski said in the statement. "He has a sensational year, both on and off the court. He was an amazing factor for our success in winning the national championship. From everything we have found out, Justise is projected to be a high lottery pick and we believe that to be true. This is a great time to take advantage of this opportunity. We're behind him all the way and love him and his family."


The 6-foot-6 wing averaged 12.5 points and 6.5 rebounds per game this season and also shot 42 percent from beyond the arc. Multiple NBA executives told ESPN that Winslow is a lock as a lottery pick, and could be selected in the top five. He is No. 6 on ESPN NBA Insider Chad Ford's most recent big board.


Fellow freshmanJahlil Okafor, who is expected to be taken either first or second overall, announced last week he also is leaving for the NBA.Tyus Jones, who was named the Final Four's Most Outstanding Player, has not yet made a decision.